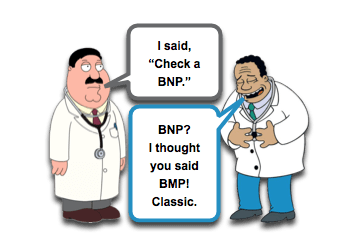 We doctors love to order tests, often only to confirm things we already know. Did that lactate level for the child in SHOCK help your decision to start vasopressors? Better yet, did that WBC count really help us determine whether the child with fever has a bacterial infection? Yet, there are times when our clinical assessment can still leave us struggling to decide between two significant entities: like respiratory distress due to heart failure or pulmonary disease. In adults, we often us the B-Type Natriuretic Peptide (BNP) to help us distinguish between these two issues, but can we use the BNP in children? Let us review the BNP use in children:

BNP / NT-proBNP levels are influenced by the patient’s age (come on people, it’s pediatrics… of course the age matters)

Diagnosis of newly developed heart failure in children is very challenging as it often initially presents with subtle and non-specific findings.

To evaluate predictors of morbidity and mortality in pediatric patients with pulmonary hypertension (PH), laboratory and echocardiographic measures of PH were analyzed. […]

The aim of this article is to evaluate the clinical utility of brain natriuretic peptide in pediatric patients, examining the diagnostic value, management, and prognostic relevance, by critical assessment of the literature. […]

The purpose of this study was to determine whether the serum N-terminal pro-brain natriuretic peptide (NT-proBNP) level could be a useful marker for Kawasaki disease in the pediatric emergency department (PED) and in the presence of fever duration of 4 days or less (hyper-acute phase of Kawasaki disease). Medical records of patients who were 1 month to 15 years old of age and presented at the PED with suspected Kawasaki disease from January 1, […]

The aim of this article is to review the diagnostic and prognostic relevance of measurement of brain natriuretic peptide (BNP) and N-terminal pro-brain natriuretic peptide (NT-proBNP) in pediatric patients with heart failure caused by various acquired and congenital heart diseases (CHD). In January 2013, we performed a computerized literature search in the National Library of Medicine (PubMed access to MEDLINE citations; http://www.ncbi.nlm.nih.g […]

Myocardial damage and strain are common in children with chronic renal failure. The most prevalent pathologies, as defined by echocardiography, are left ventricular hypertrophy (LVH), diastolic and systolic dysfunction, and altered LV geometry. Troponin I and T, as well as B-type natriuretic peptide (BNP) and its cleavage fragment NT-proBNP, are known to be good markers of myocardial damage and stress, respectively, in the general adult populatio […]

Paediatric myocarditis remains challenging from the perspectives of diagnosis and management. Multiple aetiologies exist and the majority of cases appear to be related to viral illnesses. Enteroviruses are believed to be the most common cause, although cases related to adenovirus may be more frequent than suspected. The clinical presentation is extremely varied, ranging from asymptomatic to sudden unexpected death. A high index of suspicion is cr […]

The ability of serum B-type natriuretic peptide levels (BNP) to predict outcomes in children with heart failure (HF) has not been well demonstrated. This study was designed to determine whether BNP levels predict outcomes in patients with moderate symptomatic HF. […]

The purpose of this study was to assess the ability of plasma B-type natriuretic peptide (BNP) to diagnose significant cardiovascular disease (CVD) in the pediatric population. […]

As the pediatric OHT population expands, there is increasing demand for convenient, yet sensitive screening techniques to identify children with acute rejection when they present to acute care facilities. In children, symptoms of acute rejection or other causes of graft dysfunction are often non-specific and can mimic other childhood illnesses. The aim of this study was to assess the utility of BNP as a biomarker to assist providers in clinical d […]

There has been growing interest in the use of serum B-type natriuretic peptide (BNP) and the N-terminal segment of its pro-hormone (NT-proBNP) as biomarkers for cardiac disease. The aim of this review is to summarize the current state of knowledge regarding BNP and NT-proBNP measurement in the pediatric population. […]

Although less common than in adults, heart disease is a significant cause for morbidity and death in infants and children. Congenital structural cardiac anomalies and acquired heart diseases may result in heart failure. […]