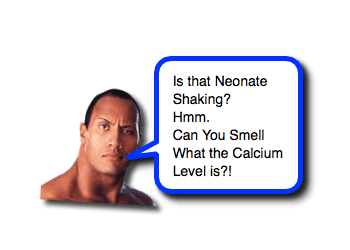 Unquestionably, a lot of electrolyte panel laboratory studies get ordered reflexively and have little true clinical utility. The healthy kid (or adult for that matter) with vomiting and diarrhea for two days does not typically benefit from the “Chem 200” {recall, dehydration is a clinical diagnosis}. Labs are useful when they help answer specific questions that they are capable of answering (ex, is the kid hypoglycemic? Not, is the kid dehydrated). That being said, certain populations have varying risks for electrolyte disturbances – one notable one is the neonate (goes along with “never trust a neonate.“). Let us look at one interesting issue – Hypocalcemia in the Neonate.

Hypocalcemia in the Neonate

Hypocalcemia is common in the critically ill patient. In this population, however, the diagnosis of hypocalcemia is complicated by limitations in the interpretation of the total plasma calcium concentration. These limitations are principally the result of the effects of hypoalbuminemia and disorders of acid-base balance on the total calcium concentration. Thus, measurement of ionized calcium can be critical in determining an individual’s true ser […]

Neonatal seizures are a potentially life-threatening pediatric problem with a variety of causes, such as birth trauma, asphyxia, congenital anomalies, metabolic disturbances, infections, and drug withdrawal or intoxication. Thorough and timely evaluations of such patients are necessary to identify and treat the underlying etiology, therefore reducing potential morbidity and mortality. We review neonatal seizures and hypocalcemia and present the c […]

A 6-week-old premature infant who was born at 29 weeks of gestation presented to the emergency department with a several-hour history of stiffness and increased alarms on his apnea monitor at home. On arrival he was noted to have generalized seizures, apnea, and bradycardia. He was intubated and required cardiopulmonary resuscitation including chest compressions and medications. After stabilization he was transferred to the neonatal intensive car […]

Ionized calcium is a physiologically critical calcium pool. It is easily determined, although accuracy depends on sample handling. As a clinical parameter, directly measured ionized calcium has particular import in the care of neonates, patients with sepsis or other cardiovascular instability, massively transfused patients, and those undergoing cardiopulmonary bypass or liver transplantation. Disturbances of calcium occur in many other settings, […]