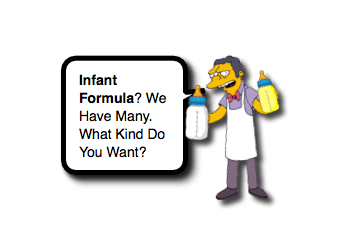 Often a little knowledge of primary care topics can help our evaluation and management of infants presenting to the ED. We have discussed some of these previously (ex, Growth, Developmental Milestones), but let us take a moment to review another important topic – Infant Formula:

Human Breast Milk is the Best:

Infant formulas are designed to be a substitute for breast milk. Since they are sole source of nutrition for growing and developing infants, they are highly regulated by the government. All ingredients in infant formulas must be considered “generally recognized as safe.” Manufacturers are continually modifying their products to make them more like breast milk. Functional ingredients added to infant formula include long-chain polyunsaturated fatty […]

Food-related laws and regulations have existed since ancient times. Egyptian scrolls prescribed the labeling needed for certain foods. In ancient Athens, beer and wines were inspected for purity and soundness, and the Romans had a well-organized state food control system to protect consumers from fraud or bad produce. In Europe during the Middle Ages, individual countries passed laws concerning the quality and safety of eggs, sausages, cheese, be […]

Breastfeeding and human milk are the normative standards for infant feeding and nutrition. Given the documented short- and long-term medical and neurodevelopmental advantages of breastfeeding, infant nutrition should be considered a public health issue and not only a lifestyle choice. The American Academy of Pediatrics reaffirms its recommendation of exclusive breastfeeding for about 6 months, followed by continued breastfeeding as complementary […]

Although the American Academy of Pediatrics and the American Academy of Family Physicians recommend breast milk for optimal infant nutrition, many parents still choose formula as an acceptable alternative. The wide variety of available formulas is confusing to parents and physicians, but formulas can be classified according to three basic criteria: caloric density, carbohydrate source, and protein composition. Most infants require a term formula […]