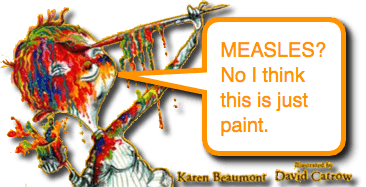 Measles? Seriously, don’t we only need to talk about Measles in medical school during virology… RNA virus, funny spots in the mouth, blah, blah… next question… how can a Morsel on Measles be useful? We have eradicated Measles in the US… haven’t we?

Well, unfortunately, in our society, popular TV and Movie stars have more powerful voices than do physicians, so not everyone vaccinates their children. This has allowed for a recent outbreak within the USA.

What I learned in Medical School (and have since forgotten):

What should I do?