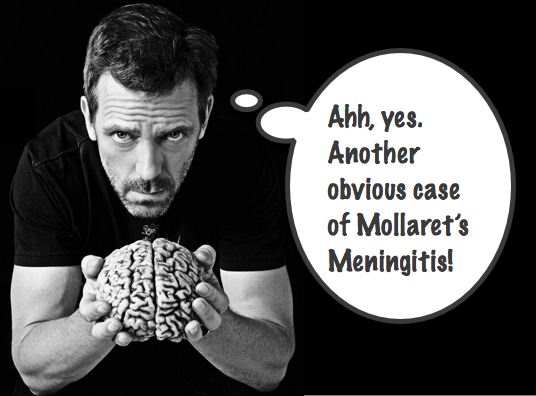 The best part of working in the Emergency Department at Carolinas Medical Center is being surrounded by so many brilliant colleagues.  I learn something new every shift (and, in truth, is where the majority of these Morsels are baked).  Today’s Morsel is a reflection of that fact.

We evaluate headache often.  With the mantra of “worst first” echoing in our ears we naturally consider meningitis, but, fortunately, we are often able to exclude it based on our exam.  In previous Morsels, we have discussed concerning characteristics of headaches as well as some interesting causes of headaches (AVM, meningococcemia, pseudotumor).  What if, however, the patient has had viral meningitis previously?  What is Mollaret’s Meningitis anyway?

Can be separated into two main categories:

Acute viral meningitis is the most common infection of the central nervous system. Most cases occur in children and young adults and are due to enteroviruses. Although the common causes of acute viral meningitis still lack treatment with an effective antiviral agent, management of patients is changing because of better and more rapid diagnostic tests to determine the exact viral etiology. These tests reduce the cost of workups and shorten hospita […]

We report the first pediatric case of Mollaret meningitis in an adolescent female with acute lymphoblastic leukemia in remission. This patient had signs and symptoms consistent with meningitis, with three episodes over a 3-month period. Human herpesvirus 6 (HHV-6) was identified during her last episode from polymerase chain reaction assay of a cerebrospinal fluid specimen. She was treated successfully with foscarnet, after which HHV-6 was undetec […]