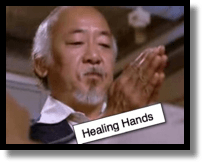 Nursemaid’s elbow: honestly, this may be the single most enjoyable condition to treat. Yes, we all do a lot of fantastic feats daily to help improve the health and well-being of children, but I would argue that few are as instantaneously rewarding as using your bare hands to completely alleviate a child’s (and his/her family’s) distress. It makes you feel like Mr. Miyagi!

– Don’t be mean… give the kid some analgesic.
– Don’t fret over which technique is most superior… they both work well, so if one doesn’t work… try the other one. Usually, I’ll start with the hyperpronation, merely because the position of the arm initially makes easier to attempt.
– Right after you make the reduction attempt, find an ice-pop as another “analgesic” and a way to test the success of your reduction.
– Keep your differential open. If the first and second attempts don’t work, you can try again, but after the fourth time, it is time to consider other injuries.