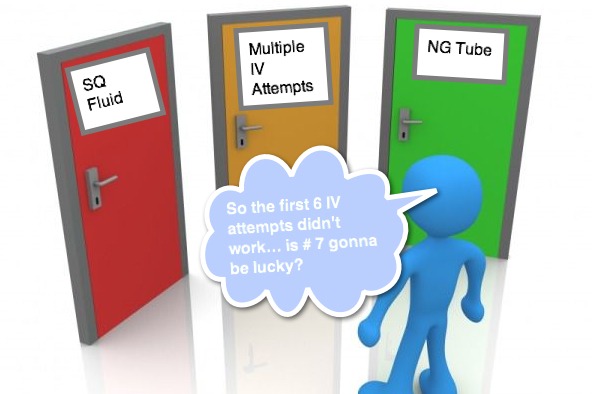 The Morsels have focused a lot on pediatric dehydration topics in the past. We have covered the utility of Probiotics and the need to be vigilant against Hypoglycemia. We have discussed specific infections, like Salmonella, and whether antibiotics are necessary.  Naturally, we have also covered Oral Rehydration Therapy and the burden of Diarrhea. Despite what we know, we still occasionally run into “problems” when managing the pediatric patient with dehydration.

Unfortunately, regardless of the general public’s belief that getting an IV is easy, obtaining an IV in a dehydrated child is quite difficult, even when they are only moderately dehydrated.  This is one great reason to really advocate for ORT in anyone who is not severely dehydrated.  Unfortunately, on occasion, ORT will not be successful at adequately rehydrating the patient.  What are our options then?

Moral of the Story:

It is easy to order an IV… but it is not always easy to obtain an IV, particularly in the child who is dehydrated.  It is useful to consider your other options before you request that IV is attempted for the 7th time.  The 7th attempt is usually not that lucky.