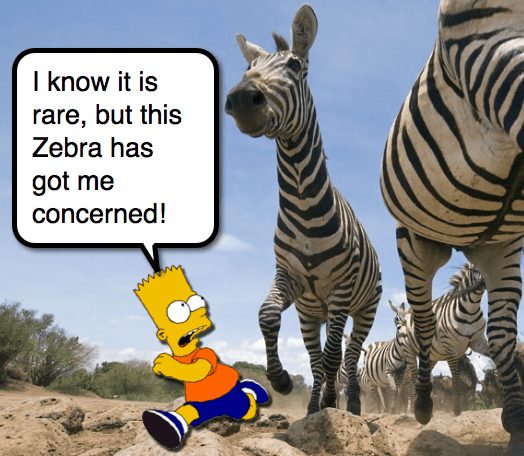 We all know that when you “hear hoofbeats, think of horses” and when you “see stripes, think of zebras.”  Unfortunately, the horses and zebras often look similar.  While tachypnea is most often due to a viral process like Bronchiolitis, or a Pneumonia, we must stay vigilant for it being one of those Subtle Signs of Heart Failure.  Keeping a keen eye and ear on alert for these zebras is part of what our job demands.  A child presenting with Back Pain should catch your attention just like a the child complaining of persistent leg pain.  While it is most likely innocuous, it could also be a zebra getting ready to stampede: Osteosarcoma.

So the next time you see the pre-teen who is complaining of knee pain after running in gym and you really want to blame “growing pains” or a minor strain… just pause and consider that those hoofbeats you hear are actually those of the stampeding Osteosarcoma Zebra.

Background. Little is known about how cumulative chemotherapy delivery influences the poorer outcome observed in young adult (YA, 18-40 years) versus pediatric (<18 years) osteosarcoma patients. Here, we retrospectively examined differences in presentation, therapy, including cumulative chemotherapy dose, and outcome in YA and pediatric patients. Methods. We reviewed 111 cases of high-grade osteosarcoma at Moffitt Cancer Center between 1988 an […]

The aim of the study was to evaluate outcomes with an examination of individual predictors influencing survival at a single institution. […]

Although osteosarcoma (OS) is a rare malignancy, it is ranked among the leading causes of cancer-related death in the pediatric age group. The cancer’s low prevalence and its large tumor heterogeneity make it difficult to obtain meaningful progress in patient survival. In this review we present an overview of current clinical trials which largely focus on stimulation of the immune system or rely on the inhibition of kinases such as Src and mTOR. […]

Pathological fracture is an uncommon presentation in patients with long bone osteosarcoma. […]

In the pediatric population, malignant osseous tumors of the spine include osteosarcoma, Ewing sarcoma, lymphoma, and metastatic neuroblastoma. Although these tumors are rare, prompt diagnosis and recognition are critical to the overall prognosis. Improved understanding of the natural history of spine deformity, combined with advances in imaging, surgical technology, radiation therapy, and chemotherapeutic regimens, has improved survival rates an […]

It has been difficult to identify the molecular features central to the pathogenesis of osteosarcoma owing to a lack of understanding of the cell or origin, the absence of identifiable precursor lesions, and its marked genetic complexity at the time of presentation. Interestingly, several human genetic disorders and familial cancer syndromes, such as Li-Fraumeni syndrome, are linked to an increased risk of osteosarcoma. Association of these same […]