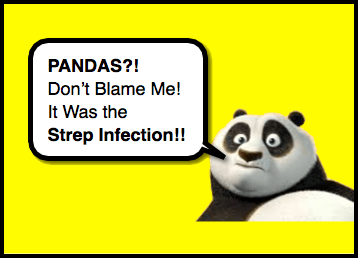 We have previously addressed the notion that “Not All That Shakes is a Seizure.” Often, just by witnessing the “shaking” it is possible to lower the concern for seizures; however, refrain from being dismissive, as there are a number of other conditions that may lead to unusual shaking, twitching, and tic-ing.  Chorea, for example, can be quite alarming to see.  Occasionally, someone may also mention a condition that causes me to stare blankly. One of these befuddling conditions is even associated with Strep Infection… perfect… kids love to collect strep!  Let’s take a moment to review PANDAS (no, not the large furry mammal that eats bamboo) so that we may appear less befuddled.

The first cases of pediatric autoimmune neuropsychiatric disorders associated with streptococcal infections (PANDAS) were described >15 years ago. Since that time, the literature has been divided between studies that successfully demonstrate an etiologic relationship between Group A streptococcal (GAS) infections and childhood-onset obsessive-compulsive disorder (OCD), and those that fail to find an association. One possible explanation for th […]

Infections, and the resulting immune response to these infections, have recently received increased recognition as pathogenic mechanisms for neuropsychiatric disorders. Sydenham’s chorea (SC), a widely recognized post-streptococcal autoimmune disorder, represents a model for this proposed pathogenesis. In SC, a dysregulated immune response to a streptococcal infection is hypothesized to result in inflammation of neuronal networks, particularly th […]

Because of its reported similarities to Sydenham chorea, therapeutic plasma apheresis (TPA) has been proposed as a potential treatment of pediatric autoimmune neuropsychiatric disorders associated with streptococcal infections (PANDAS). To date, support for the use of TPA has been limited to a few anecdotal reports and a small placebo-controlled trial demonstrating dramatic symptom improvements at 1 month and 1 year follow-up. To evaluate the saf […]

Perianal streptococcal dermatitis is an infection caused by group A streptococcus (GAS). Children with a pediatric autoimmune neuropsychiatric disorder associated with streptococcal infections (PANDAS) phenotype may have tics or obsessive compulsive symptoms secondary to a systemic immune activation by GAS infecting perianal areas. In this retrospective case series, the authors describe three children with symptoms consistent with PANDAS and a co […]

The pediatric autoimmune neuropsychiatric disorders associated with streptococcal infections (PANDAS) are basically characterized by obsessive-compulsive symptoms and/or tics triggered by group-A beta-hemolytic Streptococcus infections. Poor data are available about the clear definition of PANDAS’s autoimmune origin. The aim of our study was to evaluate the prevalence of autoimmune phenomena, including thyroid function abnormalities, specific cel […]

The acronym PANDAS (pediatric autoimmune neuropsychiatric disorders associated with streptococcal infections) has been used to describe a syndrome characterized by various obsessions, compulsions, tics, hyperactivity, motor stereotypies, and paroxysmal movement disorders that are correlated with prior infection by group A beta-hemolytic Streptococcus pyogenes (GABHS) infections. Five clinical criteria can be used to diagnose PANDAS: (1) the prese […]

The purpose of this study was to describe the clinical characteristics of a novel group of patients with obsessive-compulsive disorder (OCD) and tic disorders, designated as pediatric autoimmune neuropsychiatric disorders associated with streptococcal (group A beta-hemolytic streptococcal [GABHS]) infections (PANDAS). […]