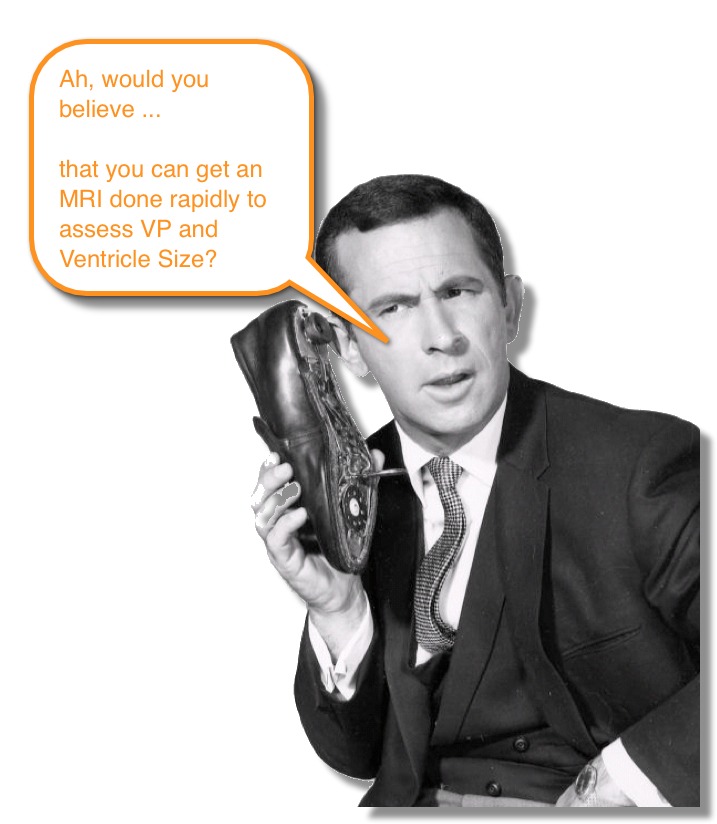 VP Shunts have greatly benefited many children with hydrocephalus.  Unfortunately, VP shunts can have complications… and we have discussed some of them before (Tapping a VP Shunt).  The evaluation of a child with a VP shunt who is not critically ill (and not in need of having the shunt tapped emergently) often involves obtaining plain films of the shunt as well as a Head CT to assess ventricle size.  This, unfortunately, often leads to numerous CT scans in a child’s life, which, as we know (Medical Radiation Exposure) can be a big deal.  Is there any other option to assess ventricle size for kids with VP shunts?

Bottom line: The literature would support the use of these rapid MRI protocols.  Your specific institution and your Neurosurgeons might not.  But, in an effort to continue to image responsibly (along the lines of the Image Gently campaign), it may be useful to discuss with your teams the use of rapid MRI in the evaluation of patients with VP shunts.

Children with shunt-treated hydrocephalus are exposed to serious amounts of radiation when undergoing computerized tomography (CT) scanning. The authors report their clinical experience with single-shot fast-spin echo (SSFSE) (quick-brain) magnetic resonance (MR) imaging as the modality of choice for the workup and follow up of patients in whom a shunt has been placed to treat hydrocephalus. […]

The authors examine the use of rapid-sequence magnetic resonance (rsMR) imaging to make the diagnosis of malfunctioning and/or infected shunts in patients with hydrocephalus. Computerized tomography (CT) scanning is usually used in this context because it rapidly acquires high-quality images, yet it exposes pediatric patients to particularly high levels of radiation. Standard MR imaging requires longer image acquisition time, is associated with m […]

Rapid brain MR imaging is often substituted for head CT in multiply imaged patients with shunted hydrocephalus. Fast TSE-T2 sequences are commonly used in these protocols. One limitation of TSE-T2 sequences is the decreased catheter delineation compared with CT. The aim of this study was to compare fast TSE-T2 with rapid SS-GRE sequences in the evaluation of intracranial shunt catheter delineation as part of a rapid nonsedated pediatric brain MR […]

Recent reports have shown the utility of rapid-acquisition magnetic resonance imaging (MRI) in the evaluation of children with hydrocephalus. Rapid sequence MRI (RS-MRI) acquires clinically useful images in seconds without exposing children to the risks of ionizing radiation or sedation. We review our experience with RS-MRI in children with shunts. […]

Children with shunted hydrocephalus have been undergoing surveillance neuroimaging, generally in the form of head CT, for evaluation of ventricular size. As the life expectancy of these children has improved due to better shunt technology and medical care, risks related to the ionizing radiation incurred during multiple head CT examinations that they are expected to undergo throughout their lifetime have become a concern. The purpose of this stud […]