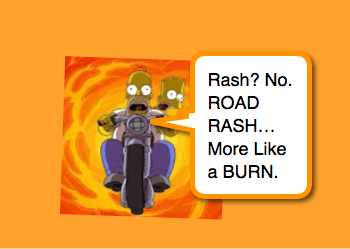 Certainly, pediatric rashes can be a challenge (and we have discussed my “Approach to the Pediatric Rash” previously).  One “rash,” however, deserves particular attention as it is not a Rash at all: it is a Burn!  Let’s remain vigilant for that benign sounding rash that may not be benign at all: Road Rash.

Traumatic tattoos can result from accidental deposition of foreign particles in the dermis. These pigmented particles become permanently lodged in the dermis after re-epithelialization of the wound and can give rise to irregular black or blue discoloration of the skin. Different methods for tattoo removal exist. The best strategy is to prevent traumatic tattooing by immediate removal of the foreign bodies before the healing process has begun. We […]

Laser Doppler imaging (LDI) has been increasingly used to predict pediatric burn wound outcome. A majority of these wounds are scald, contact, or flame burns. No study has specifically evaluated the use of LDI in pediatric friction burns. Our objective was to critically evaluate LDI assessment of pediatric friction burns to determine its predictive value with this mechanism of injury. We conducted a retrospective review of all LDI scans performed […]

Intracranial injury has been reported secondary to not only blunt and penetrating trauma but also thermal and high-voltage electrical injury. Reconstruction can be challenging, especially in the face of necrosis of large areas of the cranium. The authors present a novel case of fourth-degree thermal burn to the head caused by a rotating tire. Initial wound debridement exposed dura, prompting a dural patch and Integra® for temporary coverage. Def […]

This epidemiological study deals with 34 patients with friction burns sustained between January 2007 and January 2008. The age group most affected was that between 21 and 30 yr, with a male predominance. Road traffic accidents were the commonest cause of friction burns (31 patients) and the lower limb was body part most commonly affected. The therapy was mostly conservative (no. 18): 14 patients were treated with a split-thickness skin graft, and […]

This epidemiological study deals with 60 patients with friction burns between January 2004 and January 2006. The age group most affected was that between 21 and 30 years, with male predominance. Road traffic accidents were the commonest cause of friction burns (56 patients), and the lower limb was the most frequently affected part of the body. Patient management was performed according to the degree of the burn injury. It is suggested that most f […]

Treadmills have become relatively common in American homes. This machine can be dangerous for children because they can sustain friction burns to the hands when the moving treadmill is touched. With aggressive wound care and physical therapy, most of these burns will heal without surgery. However, some patients will require reconstructive surgery to release contractures. We report our experience with a series of patients who suffered friction bur […]

Korea has recently seen an increase in pediatric hand injuries associated with treadmills. This study was conducted to identify the frequency, patterns, treatment and outcome of these injuries, in the hope of developing preventive programs. A retrospective review of the medical records of 25 children, all with treadmill-induced friction hand injuries, was conducted at the Hallym Burn Centre, Hangang Sacred Heart Hospital, Seoul, Korea, during the […]

Treadmills are a burn risk for children. A child’s hand can get trapped in the conveyor belt, causing friction burns to the underlying tissue. The purpose of this retrospective study was to review the characteristics and treatment of treadmill-related burns in children from 1998 to 2002. Ten patients, at a mean age of 3.4 years, sustained injuries associated with treadmill use. Trapping of the hand between the conveyor belt and the base was the m […]

Treadmills are popular home fitness machines in American homes. Young children are at risk for friction injuries if they contact moving treadmills. The purpose of this study was to determine the impact of treatment of treadmill friction injuries in children. A review of 1,211 pediatric patients younger than 6 years treated at the Intermountain Burn Center between July 1997 and June 2002 was conducted. Forty-eight of these cases (4%) were treadmil […]

The management of seven children with vacuum cleaner friction burns is described. Six of the children sustained full thickness burns. Four were treated operatively. Indications for surgery are outlined and important accident prevention strategies are highlighted. […]