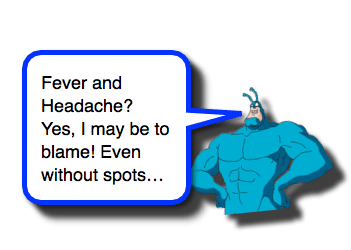 Ticks are disgusting (no offense ticks). They engorge themselves on our blood, becoming bloated sloth-like sacs of our serum. While that is certainly not appealing, what makes them most offensive is their tendency to transmit awful diseases to us.  These diseases (and unique conditions – Tick Paralysis) are numerous, but one of the most important to review (especially for those of us in North Carolina, USA) is Rocky Mountain Spotted Fever.

Tickborne rickettsial diseases continue to cause severe illness and death in otherwise healthy adults and children, despite the availability of low-cost, effective antibacterial therapy. Recognition early in the clinical course is critical because this is the period when antibacterial therapy is most effective. Early signs and symptoms of these illnesses are nonspecific or mimic other illnesses, which can make diagnosis challenging. Previously un […]

Rocky Mountain spotted fever (RMSF) is an increasingly important cause of preventable mortality in children in Sonora, Mexico. Although early treatment with tetracycline has shown to prevent fatal outcome, the disease remains a life-threatening condition, particularly for children. This study describes the clinical factors associated with pediatric mortality due to RMSF in Sonora, in order to guide healthcare practices. […]

To evaluate whether cosmetically relevant dental effects occurred among children who had received doxycycline for treatment of suspected Rocky Mountain spotted fever (RMSF). […]

North American tick-borne illnesses are a group of important emerging diseases whose incidence has been increasing for the past decade. Emergency physicians may be the first contact for patients with symptoms of tick-borne illness, thus it is important that these diseases remain on a physicians’ differential diagnosis when presented with an appropriate clinical presentation. This CME activity provides an overview of the most common tick-borne ill […]

RMSF is a potentially life-threatening disease that requires prompt diagnosis and empiric initiation of an appropriate antimicrobial agent. For the clinician treating young children with RMSF, there are few options. The safety and efficacy of fluoroquinolones and orally administered parenteral chloramphenicol have not been established in the pediatric population. Therefore, widespread and casual use of these agents is not recommended. Doxycycline […]