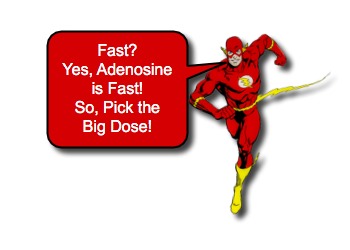 Supraventricular Tachycardia (SVT) can be a very rewarding condition to treat! It is generally easy to diagnose and can be very satisfying to treat. When treating it, we also get to use one of the “coolest” medicines (ok, it isn’t quite as cool as Ketamine): Adenosine. Unfortunately, sometimes SVT can be recalcitrant (like a teenager) and won’t respond to the 1st dose of Adenosine. Let us take a second to review refractory SVT and the Adenosine Dose:

Adenosine administration with a stopcock is the recommended treatment for pediatric patients with acute supraventricular tachycardia. Recent reports suggest that many infants do not respond to the first dose of adenosine administered. Our aim is to determine whether administration of adenosine with a stopcock delivers lower-than-expected drug doses in patients weighing less than 10 kg, corresponding to weights of infants. […]

Supraventricular tachycardia (SVT) is a common tachyarrhythmia in the pediatric population that can necessitate immediate treatment. Adenosine has been well studied as a mainstay treatment, but the methods of adenosine administration have not been very well delineated. The intraosseous technique has presented itself as a possible method of administration. We describe 2 cases in which adenosine was administered through bone marrow infusion to conv […]

To determine the optimal adenosine dose effective in supraventricular tachycardia (SVT) and underlying conditions affecting the effective dose in children. […]

To determine the frequency of successful cardioversion and the adverse effects of adenosine treatment in pediatric emergency department patients with supraventricular tachycardia (SVT). […]

Adenosine is an effective, safe drug for the diagnosis and treatment of paroxysmal tachycardias in adult and pediatric patients. A starting dose of 0.05-0.10 mg/kg as a rapid bolus injection is recommended for infants and children. An electrophysiologic effect can be expected within 20 seconds after injection. Dosage may be increased up to 0.3 mg/kg in steps of 0.05-0.10 mg/kg or until conversion to sinus rhythm is reached. Due to its basic elect […]

Intravenous bolus adenosine was given to four pediatric patients aged 1 month to 8 years who had paroxysmal supraventricular tachycardia that had not responded to conventional medical therapy. Adenosine (one to three doses) was successful in converting the arrhythmia to normal sinus rhythm in all four cases, and no side effects of the drug were noted. […]