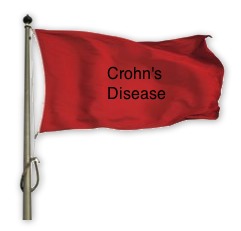 We are all certainly familiar with the patient who presents with abdominal pain and all of the various concerns that we mentally filter through.  We are also aware that Chronic Recurrent Abdominal Pain (CRAP) can be frustrating for patients, their families, and for us as well.  Often, once I hear that this abdominal pain has been occurring over the past several weeks I can feel my mind wander off to other tasks that need to be attended to.  As you know, part of the goal of these Morsels is to help keep us vigilant for those needles in the haystack of illness…

But, unfortunately, the chronic nature may inappropriately decrease my vigilance.  Additionally, if the child has already been “diagnosed” with CRAP, then diagnostic momentum will often undermine my vigilance even more.  Furthermore, I know that I need to help contain costs by not inappropriately ordering unwarranted tests.  Yet, I also have a little voice in the back of my mind reminding me that terrible conditions, like Crohn’s Disease, can be mistaken initially for CRAP.

So what things can help distinguish a patient with Chronic Recurrent Abdominal Pain from someone with Inflammatory Bowel Disease?

The combination of all three had sensitivity of 94% for Crohn’s Disease.

Other Flags that may not be as colorful, but I still think are important

Hopefully, by actively looking for these Red Flags you can help pick out the needle of Crohn’s Disease from the haystack of CRAP.