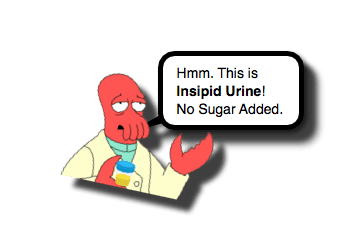 Recently, @EMHighAK (Alex Koyfman) asked about any “teaching points” with respect to Pediatric DKA and Cerebral Edema. In addition to referencing an oldie, but a goodie morsel on Cerebral Edema, I also mentioned that we should all be careful not to attribute all ketonuria in vomiting kids to “starvation ketosis.” That got me to thinking about other potential diabetes related urine pitfalls. What about the child with polyuria but no glucosuria? Is that reassuring and do I quickly assume that the child is just super-hydrated? Let us take a minute to recall that there is another diabetes to consider: Diabetes Insipidus.

Diabetes Insipidus: What’s in a name?

Polydipsia and polyuria are common reasons for referral to the Pediatric Endocrine clinic. In the absence of hyperglycemia, diabetes insipidus (DI) should be considered. The objectives of the study were to determine the prevalence of central DI (CDI) in a group of children presenting for evaluation of polydipsia and polyuria, and to determine if predictive features were present in patients in whom the diagnosis of DI was made. […]

To determine the occurrence rate of central diabetes insipidus in pediatric patients with severe traumatic brain injury and to describe the clinical, injury, biochemical, imaging, and intervention variables associated with mortality. […]