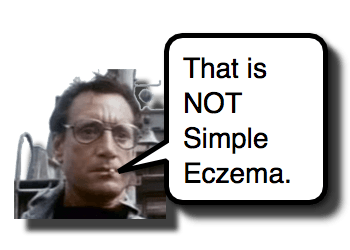 The evaluation of pediatric patients with rashes is a common occurrence in the Ped ED… and a common area of frustration for many of us (ok, maybe it is just me).  We have previously covered an approach to the evaluation of the Pediatric Rash.  We have also covered a variety of common causes of pediatric rashes (ex, Scabies, Tinea, Diaper Dermatitis and Molluscum) including eczema. While many of these conditions are simple nuisances, some can become more problematic. Let’s make sure we stay vigilant for Eczema Herpeticum.

Eczema herpeticum is an easily missed entity most commonly seen in the pediatric population and carries the risk of systemic compromise and a 10% mortality rate. Clinicians should maintain high clinical suspicion when encountering children or young adults with a history of atopic dermatitis or other erosive dermatoses and who present with vesicular lesions, punched-out erosions, and systemic symptoms. We present 3 severe cases of eczema herpeticu […]

There is concern that the use of topical corticosteroids in patients with eczema herpeticum may facilitate dissemination of herpes simplex virus and worsen disease. Our primary aim therefore was to determine whether topical corticosteroid use in children hospitalized with eczema herpeticum is associated with longer hospital length of stay (LOS). We performed a multicenter retrospective cohort study of 1,331 children ages 2 months to 17 years […]

To describe the clinical characteristics of pediatric patients with eczema herpeticum and to determine the predictors of hospitalization, and recurrence and repeat episodes. […]

To describe the epidemiology and outcomes of children hospitalized with eczema herpeticum and to determine the association with delayed acyclovir on outcomes. […]

Eczema herpeticum (EH) is a widespread herpes simplex virus infection of inflamed skin, most often occurring in patients with atopic dermatitis (AD). A monomorphic eruption of dome-shaped blisters and pustules in the eczematous lesions along with severe systemic illness lead to the clinical diagnosis, but atypical variants with disseminated slits may also occur. Topical use of corticosteroids is alleged to be a pathogenetic factor for EH, but pre […]