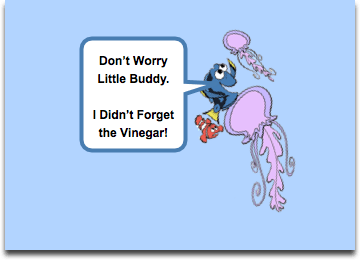 Summer is officially in full swing and we all love it! Well, my kids do get tired of hearing about all of the potential hazards that lurk around every corner, but I just have a hard time turning that part of my brain off. I mean, someone has to anticipate the Fish Hook FBs, Vehicular Hyperthermia, and Heat Related Injuries, right? Of course someone also needs to be paying attention to the water related dangers as well (ex, Submersion Injury Prevention, C-Spine Injury and Submersions) and that brings to mind all of the crazy sea creatures that want to cause us pain. Let’s take a minute to digest a Morsel of info on Jellyfish Envenomations:

Several species of jellyfish native to the western Indian Ocean have entered the Mediterranean Sea through the Suez Canal. Since the late 1980s, each summer Rhopilema nomadica forms swarms as long as 100 km in the southeastern Levant and since the millennium aggregations of additional nonnative jellyfish have been sighted. The aim of this study was to evaluate children seen in the emergency department after jellyfish envenomations and to establ […]

In Guadeloupe (French West Indies), many marine envenomation cases by jellyfish are observed. Some of them might induce an Irukandji syndrome (IS). The aim of this study was to analyse the clinical features of IS from the envenomation cases in the two public hospitals in Guadeloupe, and to compare them to non-IS stings. […]

We present a 15-year-old female patient with an anaphylactic reaction to a jellyfish sting, sustained while surfing in the Mediterranean Sea. She experienced immediate difficulty in breathing, hoarseness and itching and was taken by ambulance to the emergency department, receiving intramuscular adrenaline on the way. She presented with periorbital swelling and facial edema and improved with systemic steroids and antihistamines. She was discharged […]

Jellyfish stings are the most frequently reported marine animal envenomation worldwide. However, data on jellyfish sting from Malaysia remains obscure due to inadequate research. […]

An 11-year-old girl presented to the emergency department with severe pain after a jellyfish sting at a New South Wales beach. Bluebottle (Physalia) jellyfish was deemed the most likely cause considering her geographical location. The Australian Resuscitation Council Guideline (2010) suggests immersing in water as hot as can be tolerated for 20 min for treating pain from jellyfish stings. This guideline was written based on past case reports, b […]

This article describes the epidemiology and presentation of human envenomation from marine organisms. Venom pathophysiology, envenomation presentation, and treatment options are discussed for sea snake, stingray, spiny fish, jellyfish, octopus, cone snail, sea urchin, and sponge envenomation. The authors describe the management of common exposures that cause morbidity as well as the keys to recognition and treatment of life-threatening exposures. […]

Cnidarian, or jellyfish, stings are a common malady in tropical Emergency Departments. There are limited studies examining cnidarian stings in the United States. The team investigated the epidemiology and treatments for jellyfish stings presenting to an urban emergency department (ED) in Honolulu, Hawai’i. […]

This manuscript presents both demographic and descriptive data related to a distressing clinical condition known as Irukandji syndrome. Chart audit and observation data were collected to explore trends in patient characteristics and to review the current practices surrounding the management of the syndrome by advanced practice ED nurses. […]

The objective of the study was to compare cutaneous treatments (heat, papain and vinegar) for acute jellyfish (Carybdea alata) stings. Healthy adult volunteer subjects received a single-tentacle jellyfish sting on each forearm. One forearm was treated with hot-water immersion (40-41 degrees C). This was compared with the other forearm, which was randomized to a comparison treatment of papain meat tenderizer or vinegar. Pain was measured at 0, 2, […]

To determine the immediate and delayed effects of jellyfish stings, and correlate these with microscopic identification of jellyfish nematocysts. […]

During the summer of 1987 the shores of Israel were infested by waves of jellyfish. Thirty patients, mainly children, suffering various degrees of painful injuries to different parts of their bodies were treated in our emergency ward. A typical case is reported and the appropriate treatment recommended. […]