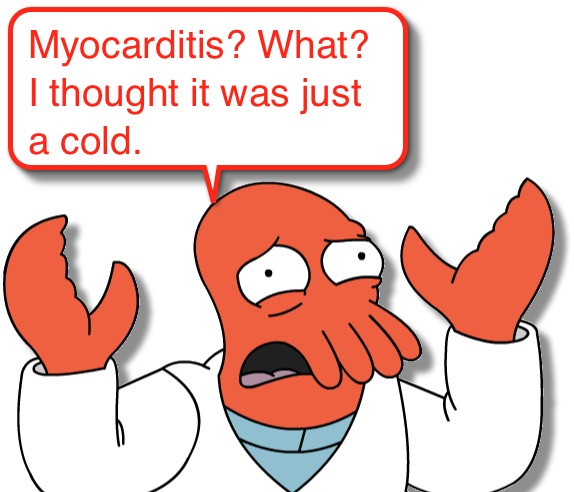 As you know, a common theme of the Ped EM Morsels is Vigilance: many potentially severe conditions present similarly to benign illnesses.  Kawasaki Disease, Rhabdomyolysis, Crohn’s Disease, and Compartment Syndrome are conditions that come to mind; however, one that warrants special consideration is Myocarditis.

Exam Findings to Look For

So I was taught that the child who is persistently tachycardic, after appropriate therapies, needs to have myocarditis considered on the DDx.  I do think that this is useful to still consider, but the question is, how useful is the lack of tachycardia in ruling out Myocarditis?

Myocarditis is a difficult diagnosis to make, but an important one to consider!  Its rarity will make it much more likely that the patient you are sending home with the “viral illness” or “wheezing” will actually have a mild condition; however, our job is to consider the life-threatening as well as the common.

Get into the habit of always checking for hepatomegaly and skin perfusion in any kid with a respiratory complaint or vomiting.  While you are most likely to not find any abnormalities, you will not ever find the important ones if you don’t look for them.

If you are concerned for Myocarditis, check an ECG and a CXR… you could also do a quick bedside ultrasound.

Pediatric myocarditis is a known cause of dilated cardiomyopathy and is associated with significant mortality. Our primary objective was to describe the frequency of presenting symptoms, signs, and investigation results among children diagnosed with acute myocarditis. Our secondary objective was to review these patients’ initial diagnoses by the emergency physicians. […]

The objective of this study was to define the test characteristics of cardiac troponin T (cTnT) in pediatric patients who presented with suspected myocarditis. […]

The objective of the study was to characterize the clinical profiles of pediatric patients with acute myocarditis and dilated cardiomyopathy (DCM) before diagnosis. […]

The goal was to determine, in children with myocarditis, the frequency of various presenting symptoms and the sensitivity of clinical and laboratory investigations routinely available in the emergency department. […]