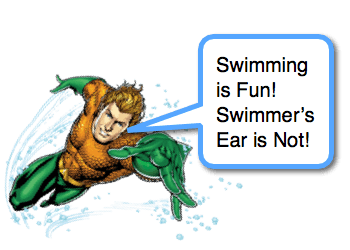 Summertime brings many delightful activities that had been left hibernating during the cold winter months. With each activity, however, comes a variety of injuries and illnesses.  Certainly, we are aware of the potential injuries that come with activities like fireworks or skateboarding, but the summertime water activities bring their own unique issues like submersion injuries or C-spine injuries. Swimming can also lead to more minor, yet very annoying issues, like swimmer’s ear.  Let’s take a moment to enjoy a morsel of Otitis Externa:

The American Academy of Otolaryngology–Head and Neck Surgery Foundation (AAO-HNSF) has published a supplement to this issue featuring the updated Clinical Practice Guideline: Acute Otitis Externa, as a supplement to Otolaryngology-Head and Neck Surgery. To assist in implementing the guideline recommendations, this article summarizes the rationale, purpose, and key action statements. The 8 recommendations developed address appropriate diagnosis o […]

This clinical practice guideline is an update and replacement for an earlier guideline published in 2006 by the American Academy of Otolaryngology-Head and Neck Surgery Foundation. This update provides evidence-based recommendations to manage acute otitis externa (AOE), defined as diffuse inflammation of the external ear canal, which may also involve the pinna or tympanic membrane. The variations in management of AOE and the importance of accurat […]

Malignant external otitis in the pediatric population is primarily a disease of children with chronic illness or immunosuppression. The presence of severe, unrelenting otalgia, otorrhea with isolation of Pseudomonas aeruginosa, a markedly elevated erythrocyte sedimentation rate, and evidence of bone destruction on computed tomography scan should alert the clinician to the diagnosis. Unlike adults, children have a higher incidence of seventh nerve […]