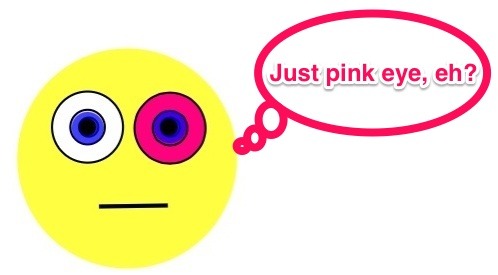 Yes, when it is 3am in the Peds ED and there are 20 patients waiting to be seen, the chief complaint of “red eye” on the chart can be seen as a “easy” disposition: “Conjunctivitis. Polytrim. Discharge.” Ok, being superiorly trained, you have also considered corneal abrasions… Which also lead you to the dispensing of Polytrim and a quick disposition.

While this tactic will certainly be appropriate for the majority of the cases of pediatric red eye, let us not forget what one of the common themes of the Ped EM Morsels is: staying vigilant.

Pediatric Red Eye – The Under Appreciated

So the next time, before you write the diagnosis of conjunctivitis on the chart consider whether you should check a pH, get a better look into the anterior and posterior chambers, and whether there is some other significant systemic illness playing a role.