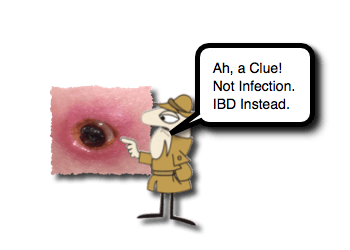 Many of us enjoy the aspect of medicine that requires our refined detective skills to not only find clues in the haystacks of chief complaints and presentations, but also use those clues to deduce a diagnosis. It is one of the unique characteristics of emergency medicine; however, when those clues are of dermatologic origin, they can be quite tricky. We have discussed several aspects of skin lesions previously (ex, Pediatric Rash, Erythema Multiforme, Scalded Skin Syndrome, Molluscum, Eczema Herpeticum, Atopic Dermatitis), but let us look at one skin eruption that looks scary and is a great clue to other problems: Pyoderma Gangrenosum.

Pyoderma Gangrenosum: What is it?

Pyoderma gangrenosum (PG) is a neutrophilic dermatosis rarely seen in children. Its features have not been well characterized in children. We sought to characterize the clinical features, etiologic associations, and treatment of PG in children younger than 18 years. […]

Pyoderma gangrenosum (PG) is a sterile neutrophilic disorder that rarely affects children. Clinical, epidemiological, and therapeutic data on pediatric PG is poor as there are many newly reported associated diseases and drugs. This paper aims to review all recent available data on pediatric PG. A systematic review of the literature was conducted using Embase, Medline, and Cochrane databases. A total of 132 articles were included in the review. Th […]

Pyoderma gangrenosum (PG) is an uncommon, ulcerative, cutaneous condition, often caused by surgical trauma that can masquerade as a pyogenic disease process requiring debridement and antibiotics. Treatment is, however, medical, with delay leading to significant morbidity. In addition, medical workup for coincident disorders has been suggested. The purpose of this study was to test the hypothesis that pediatric PG has differing disease association […]