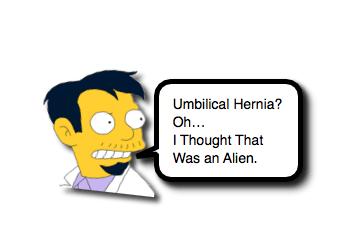 Hernias can lead to significant pain and even emergent complications. We have previously discussed inguinal hernias and the need to always consider them as a cause of inconsolability or acute abdominal pain and/or vomiting in a child.  It is really suboptimal to work a child up for intussusception only to discover the problem was discreetly covered by the diaper.  There is, however, a hernia that is easily apparent when examining the abdomen… and fortunately, rarely causes problems. The Umbilical Hernia can raise many questions though.  Let us take a moment to digest a Morsel on the Umbilical Hernia:

Pediatric Umbilical Hernia: When to Fix

Uncomplicated pediatric umbilical hernias are common and most close spontaneously. No formal practice guidelines exist regarding the optimal timing and indications for repair. The objective of this review is to examine the existing literature on the natural history of pediatric umbilical hernias, known complications of repair and non-operative approaches, and management recommendations. […]

This article reviews the incidence, presentation, anatomy, and surgical management of abdominal wall defects found in the pediatric population. Defects such as inguinal hernia and umbilical hernia are common and are encountered frequently by the pediatric surgeon. Recently developed techniques for repairing these hernias are aimed at improving cosmesis and decreasing pain while maintaining acceptably low recurrence rates. Less common conditions s […]

The aim of this study was to evaluate the long-term surgical and patient-reported outcomes of pediatric umbilical hernia (UH) repairs. […]

Almost all groin hernias in children are indirect inguinal hernias and occur as a result of incomplete closure of the processus vaginalis. The treatment is repair by high ligation of the hernia sac, which can be done by an open or laparoscopic technique. The contralateral side can be explored by laparoscopy or left alone; open exploration is no longer indicated due to the potential risk of infertility. Umbilical hernias are common in infants but […]

The assessment of pediatric patients with a possible umbilical hernia, inguinal hernias, or hydroceles can often be problematic for the pediatric nurse practitioner. Understanding the embryologic processes related to these conditions may increase the diagnostic capabilities of the practitioner. Clues to assist in the differential diagnosis and current treatment modalities will be offered. Tips for parental guidance related to these conditions wil […]