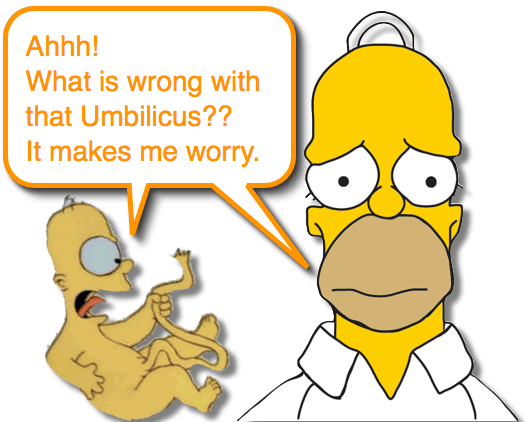 It is easy to fall into a potentially callous mindset in the Emergency Department – “If it isn’t an emergency, then it can wait to see the Primary.”  While that may be a valid statement, it won’t win you any bed-side manner awards.  It also mandates the ability to determine what presentations are not due to underlying emergent issues, which can be tricky in kids (hence the common theme of remaining vigilant).

Additionally, if the family brings their kid at 3am, they likely think it is at least important enough to warrant your potential concern.  Fortunately, many times the “important” issue revolves around a typical oddity of being a young child (like periodic breathing).  Being comfortable with some minor issues, particularly neonatal issues (currently, there are 26 categorized neonatal Morsels), can make you more comfortable with dealing with the potential emergent conditions that exist within seemingly innocuous presentations.  Umbilical Granuloma is a good example.

The omphalomesenteric duct (OMD), a temporary structure essential to fetal development, normally involutes completely by week 8 or 9 of gestation. On occasion, the OMD persists, the clinical presentations of which vary widely. We describe a case of a 6-week-old male with a patent OMD remnant that was initially treated as an umbilical granuloma, which then potentially allowed for prolapse of the small bowel through the umbilical ring. The patient […]

Umbilical granuloma (UG) is the most common umbilical abnormality in neonates, causing inflammation and drainage. Most fail to epithelialize and persist for more than 2 months. The common treatment is application of a 75% silver nitrate stick, usually repeated two to three times over a number of clinic visits. Burns have been reported following spillage onto the surrounding tissues. During a 10-year period, 302 neonates were treated for UG using […]

Three infants treated for umbilical granuloma with silver nitrate suffered chemical burns to the periumbilical area which prompted visits to the emergency department. Treatment was conservative, and the outcome was good in all cases. We recommend caution when applying silver nitrate to the umbilicus, careful drying of the umbilical exudate to prevent spillage, and discussion with parents that burns may occur but apparently are not serious. The po […]

During a 13-month period, 363 infants were followed up through the first six weeks to determine the effect of perinatal factors (birth weight, gestational age, type of delivery, and pregnancy and neonatal complications) on umbilical cord separation. Also, breast-feedings and umbilical cord care were studied. Except for cesarean section deliveries, study infants were similar to all infants (N = 1474) admitted to the same nursery during the study p […]