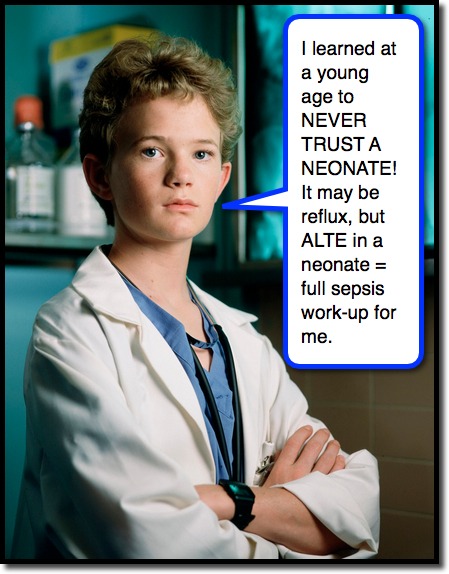 Something that is certainly unique about the practice of emergency medicine is the approach to problems from the “worst first” perspective.  Now, generally, I would consider myself as someone who minimizes testing and prefers to spend a few extra minutes getting a solid history and performing a detailed exam.  Through this approach, I find that I am able to contemplate the “Big, Bad, and Ugly” issues often without ordering a million tests (don’t get me started about the white count!).

One group, however, often requires me to accept my limitations and operate on the more conservative side of caution. The neonate may be super cute, but is also extremely tricky!  We have discussed numerous neonatal topics previously (there is an entire category for them — Hypothermia in a Neonate, Interosseous Access, No Need for Atropine, Neonatal Analgesia, and Necrotizing Enterocolitis to name a few).  We have also discussed ALTE (Apparent Life Threatening Events) previously.  While we have noted that the evaluation of an ALTE is best determined by a thorough history and physical, the neonate warrants a slightly more conservative approach.

ALTE in the NEONATE

So, in the end, when evaluating the neonate for an ALTE, don’t just resort to the common approach of “that’s an easy admission” and admit for “obs.”  Rather, be a little fearful… and start looking for those needles in the haystack of disease.

We sought to identify which patients with an apparent life-threatening event require infectious evaluation through an analysis of infants aged ≤12 months brought to an emergency department with an apparent life-threatening event. Among the 533 children evaluated, there were no cases of meningitis, 1 case of bacteremia, 17 cases of urinary tract infection, 22 cases of bacterial pneumonia, 22 cases of respiratory syncytial virus, and 2 cases of i […]

Apparent Life-Threatening Events (ALTEs) is an episode that is frightening to the observer and is characterized by some combination of apnea, color change, altered muscle tone, choking, and gagging. This study was designed to evaluate and follow up neonates who presented with clinical manifestation of an ALTE in a year. […]

We identify factors in emergency department (ED) patients presenting with apparent life-threatening events that distinguish those safe for discharge from those warranting hospitalization. […]

To determine in patients who are well-appearing and without a clear etiology after an apparent life-threatening event (ALTE): (1) What historical and physical examination features suggest that a child is at risk for a future adverse event and/or serious underlying diagnosis and would, therefore, benefit from testing or hospitalization? and (2) What testing is indicated on presentation and during hospitalization? […]

To study the historical, clinical and pneumographic correlates of apparent life-threatening events (ALTEs) in a term newborn nursery population during the first 3 days of life in a maternity hospital. […]