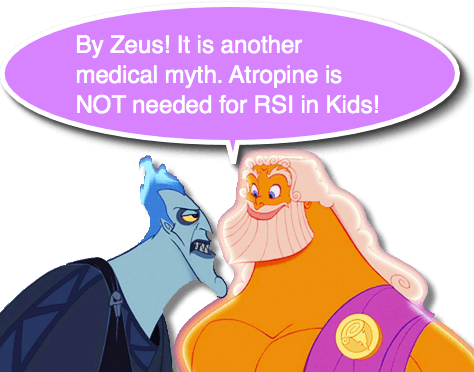 We have covered several other pediatric EM myths and misconceptions previously: Cuffed ETT are ok, a doughnut is not a good shape for LP Positioning, the 500:1 rule should not be used, Oral Rehydration is faster than IV, and you can/should give morphine to kids you are worried have appendicitis.

Recently, I was reminded of another myth that continues to have a foothold: Atropine and RSI.

WHAT I WAS TAUGHT: USE ATROPINE FOR RSI

Naturally, what I was taught can’t be wrong.  Well, maybe it’s not entirely correct though.

ATROPINE IS NOT INNOCUOUS:

KNOWN NOW: ATROPINE IS NOT REQUIRED

MY HUMBLE TAKE ON ATROPINE AND RSI

The decision to intubate any patient is one of the most important that we make as physicians.  It is very complex and hazardous, without question.  With this in mind, we need to focus on the things that will optimize first attempt success:

This is a complicated process, which is not made easier by adding additional medications, especially, when that added medication may lead to a dose calculation error, adverse side effect, or mask of more important causes of bradycardia.  For these reasons, atropine is not be routinely needed as a part of RSI.

It should be handy, especially if intubating an infant (<9-12 months) or if you need to re-dose succinylcholine.

Succinylcholine is often used to facilitate neonatal and pediatric rapid sequence intubation in the emergency department, and most relevant literature recommends administering atropine prior to succinylcholine to reduce the risk of bradycardia. Given the potential complications associated with combining these medications, we searched the published literature for evidence supporting this practice. Most studies recommending atropine premedication w […]