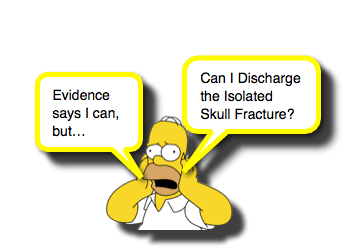 We all know that traumatic brain injury is a significant concern when evaluating pediatric patients with head injury. Over the years, this concern has lead to significant shifts in imaging and management practices: some for the better and… others perhaps not. Fortunately, while assessing minor head injuries, the risk of medical radiation is now being better balanced with the appropriate concern for traumatic intracranial injury.  We know that not everyone benefits from a head CT.  Some events, are not minor though and some do cause injuries.  Certainly, if there is intracranial hemorrhage, we need to have heightened concern, but there is still a question as to what is beneficial to do for those who are found to have an isolated, linear skull fracture without other injuries.  Do these patients need further imaging? Do they benefit from transport to tertiary center? Do they even benefit from hospitalization? Let us look at the Isolated Linear Skull Fracture:

Management of skull fracture (SF) in pediatric patients varies from observation in the emergency department (ED) to floor admission. Since 2010, a protocol for admitting children with SF specifically to the trauma service was implemented at our institution. The purpose of our study was to review the management of children with SF younger than 1 year of age. […]

With >473,000 annual emergency department visits for children with traumatic brain injuries in the United States, the risk of ionizing radiation exposure during CT examinations is a real concern. The purpose of this study was to assess the validity of rapid MR imaging to replace CT in the follow-up imaging of patients with head trauma. […]

Blunt head trauma accounts for a majority of pediatric trauma admissions. There is a growing subset of these patients with isolated skull fractures, but little evidence guiding their management. We hypothesized that inpatient neurological observation for pediatric patients with isolated skull fractures and normal neurological examinations is unnecessary and costly. […]

Despite the added radiation exposure and costs, the role of computed tomography (CT) in following pediatric skull fractures has not been fully evaluated. […]

OBJECTIVE Children with skull fractures are often transferred to hospitals with pediatric neurosurgical capabilities. Historical data suggest that a small percentage of patients with an isolated skull fracture will clinically decline. However, recent papers have suggested that the risk of decline in certain patients is low. There are few data regarding the financial costs associated with transporting patients at low risk for requiring specialty c […]

In this study the authors reviewed clinical management and outcomes in a large series of children with isolated linear nondisplaced skull fractures (NDSFs). Factors associated with hospitalization of these patients and costs of management were also reviewed. […]

The authors compared the efficacy of combining 2D+3D CT reconstructions with standard 2D CT images in the diagnosis of linear skull fractures in children with head trauma. […]

Previous studies have suggested that children with isolated skull fractures are at low risk of requiring neurosurgical intervention, suggesting that admission to the hospital may not be necessary in many instances. We seek to evaluate current practice for children presenting to the emergency department (ED) for isolated skull fractures in US children’s hospitals. […]

Blunt head trauma is a common reason for medical evaluation in the pediatric Emergency Department (ED). The diagnostic work-up for skull fracture, as well as for traumatic brain injury, often involves computed tomography (CT) scanning, which may require sedation and exposes children to often-unnecessary ionizing radiation. […]

The management of children presenting with an isolated skull fracture (ISF) posttrauma is highly variable. We sought to estimate the risk of neurologic deterioration in children with a Glasgow coma score (GCS) 15 and ISF to reduce unnecessary hospital admissions. […]

Head injury is a frequent cause of morbidity and mortality in pediatric trauma. Guidelines for obtaining computed tomographic (CT) scans in the child with mild head injury are poorly defined. This study investigated the utility of head CT scanning in the pediatric patient presenting with normal neurologic examination. All patients undergoing head CT scanning for trauma in the emergency department (ED) at a tertiary care pediatric trauma center du […]