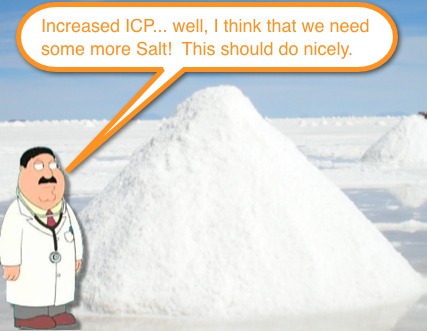 There has been a lot of focus on the appropriate evaluation of pediatric MINOR head injury (we’ve even covered the 3 month old caveat and concussions); however, let us not forget that MAJOR head injury is a serious public health problem in pediatrics.  Knowing what needs to be done when caring for these patients can actually not only save a live, but help improve the neurologic outcome.  So the question is not which kid with major head injury needs a CT (they all do); the question is, who needs Hypertonic Saline?

We often become fixated on the next step or therapy, but let’s not let the basics go unappreciated as they can lead to significant consequences if not done correctly.

If you are seeing these issues… then it is not only time to call the Neurosurgeon but it is also time to give Hypertonic Saline!

So when you tell someone to call your friendly neurosurgeon about the child head trauma who has become bradycardic and hypertensive, politely order someone else to draw up the 3% Saline … and say “STAT”… for once that term would actually apply.

Traumatic brain injury (TBI) remains the leading cause of death of children in the developing world. In 2012, several international efforts were completed to aid clinicians and researchers in advancing the field of pediatric TBI. The second edition of the Guidelines for the Medical Management of Traumatic Brain Injury in Infants, Children and Adolescents updated those published in 2003. This article highlights the processes involved in developing […]