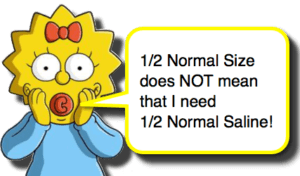 Within the PedEM Morsels, we have addressed many topics that involve fluid management. We have discussed the importance of considering glucose in all of your patients. We have also entertained the possibility of using hypertonic saline in critically ill patients. As dehydration is a constant concern, we have contemplated means to successfully manage this state as well, often without an IV. That being said, intravenous fluid administration is still required at times. Most often in the ED, it is done as boluses of isotonic fluids, but some will require maintenance fluids. Seems simple enough… but are we choosing the correct maintenance fluid?

Maintenance Fluids: Why This Matters

Intravenous fluids should garner the same respect as any other medication.

Maintenance Fluids: What I Was Taught…

Maintenance Fluids: Moral of the Morsel

The administration of hypotonic saline solution for maintenance intravenous fluid (IVF) therapy has been the standard of care, but recent evidence has shown this treatment to be associated with hyponatremia-related complications. The aim of this systematic review was to determine which IVF, i.e., a hypotonic or an isotonic saline solution, poses less risk for the development of hyponatremia among hospitalized children who require maintenance IVF […]

Use of hypotonic intravenous fluids for maintenance requirements is associated with increased risk of hyponatremia that results in morbidity and mortality in children. Clinical trial data comparing isotonic and hypotonic maintenance fluids in nonsurgical hospitalized pediatric patients outside intensive care units are lacking. […]

To compare the risk of hyponatremia between hypotonic and isotonic parenteral maintenance solutions (PMS) administered to children with very severe pneumonia, admitted in the general pediatric ward. […]

To determine whether the use of hypotonic vs isotonic maintenance fluids confers an increased risk of hyponatremia in hospitalized children. […]

To review the past year’s literature, and selected prior literature relevant to these most recent findings, regarding intravenous fluid choices in the management of critically ill children. […]

Intravenous maintenance fluid therapy aims to replace daily urinary and insensible losses for ill children in whom adequate enteric administration of fluids is contraindicated or infeasible. The traditional determination of fluid volumes and composition dates back to Holliday and Segar’s seminal article from 1957, which describes the relationship between weight, energy expenditure, and physiologic losses in healthy children. Combined with estimat […]

The American Academy of Pediatrics recommends intravenous fluids for infants with bronchiolitis who are unable to sustain oral feedings. Our randomized, prospective pilot study shows that gastric tube feeding (in 31 infants) is feasible and demonstrated comparable clinical outcomes with intravenous fluids (in 20 infants) among hospitalized infants ≤6 months of age with moderate bronchiolitis. […]

Recent studies have established the association between hypotonic fluids administration and hospital-acquired hyponatremia in children. The present paper investigated the pattern of current practice in intravenous fluid prescription among Korean pediatric residents, to underscore the need for updated education. […]

The objective of this randomized controlled trial was to evaluate the risk of hyponatremia following administration of a isotonic (0.9% saline) compared to a hypotonic (0.45% saline) parenteral maintenance solution (PMS) for 48 hours to postoperative pediatric patients. […]

Study the influence of hypotonic (HT) and isotonic (IT) maintenance fluids in the incidence of dysnatraemias in critically ill children. […]

Hypotonic saline solutions have been used for over five decades to treat children with diarrheal dehydration. However, concern has recently been raised about the potential for iatrogenic hyponatremia as a result of this therapy. We reviewed the medical records of 531 otherwise healthy children with gastroenteritis who had been admitted to the hospital for intravenous fluid therapy. We retrospectively collected data on 141 of these children who ha […]

The occurrence of acute hyponatremia associated with cerebral edema in hospitalized children has been increasingly recognized, with over 50 cases of neurological morbidity and mortality reported in the past decade. This condition most commonly occurs in previously healthy children where maintenance intravenous (IV) fluids have been prescribed in the form of hypotonic saline (e.g., 0.2 or 0.3 NaCl). In response to similar problems at The Hospital […]

A systematic review of studies comparing hypotonic versus isotonic intravenous maintenance fluids in hospitalized children was conducted to determine whether hypotonic solutions increase the risk of acute hyponatremia. Studies were identified from electronic databases and hand-searched reference lists. A total of 283 abstracts were reviewed, 55 full-text articles were retrieved, and 3 studies were included. All studies were observational and were […]