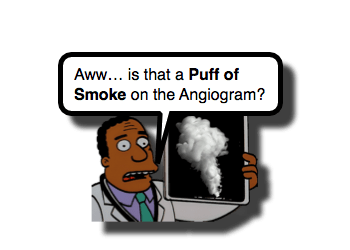 One of the refreshing aspects of taking care of children is that, generally, they don’t have a mile long list of medications or an extensive known past medical history, unlike their adult counterparts.  Unfortunately, this generality can lead us to become complacent and be caught off guard when a child presents with concerning symptoms or has unusual medical problems. We have previously discussed several “adult” illness that occur in children (ex, Pulmonary Embolism, Cholelithiasis, Nephrolithiasis) and one of those surprising entities is Stroke (CVA). While children may have an AVM that leads to hemorrhagic stroke, one important condition that may be on their PMHx list and can lead to CVA in moyamoya.  Let’s take a moment to review moyamoya so we can remain vigilant!

Moyamoya: What’s in a Name?

Moyamoya disease (MMD) is a rare occlusive cerebrovascular disease that mainly presents in children as cerebral ischemia. Prompt treatment with either a direct or indirect revascularization procedure is necessary for children with MMD in order to prevent repeated ischemic events. We herein present our experience with combined direct and indirect bypass surgery for the treatment of pediatric MMD as well as our uniquely designed perioperative proto […]

The majority of clinical studies on moyamoya disease (MMD) have focused on anterior circulation. The disease involvement of posterior circulation in MMD, mainly in the posterior cerebral artery (PCA), has been mentioned since the early 1980s, and it has been repeatedly emphasized as one of the most important factors related to poor prognosis in MMD. However, its clinical features and outcome have only been elucidated during the last few years. In […]

The descriptions of collateral circulation in moyamoya have so far been a mixture of topography-based and vessels’ source-based analyses. We aimed to investigate the anatomy and systematize the vascular anastomotic networks in pediatric moyamoya disease. […]

Approximately 30% of patients with moyamoya disease (MMD) have presented with involvement of the posterior circulation, mainly the posterior cerebral artery (PCA). Diagnosis of delayed progression of PCA stenosis in MMD may be difficult due to the diversity in clinical features. The goal of this study was to evaluate pediatric MMD patients with delayed PCA involvement after completion of revascularization of the anterior circulation. Forty-one pe […]

To assess the clinical spectrum and outcome of pediatric moyamoya disease (MMD) in Indian sub-continent. […]

Moyamoya is a progressive arteriopathy of unknown origin affecting the branches of the internal carotid artery (ICA). The arteriopathy can present as an isolated medical condition, affecting both sides of the brain (“moyamoya disease”) or can be unilateral or found in association with systemic disorders (“moyamoya syndrome”). The ischemia resulting from luminal narrowing predisposes children to transient ischemic attacks and stroke-the primary pr […]

Moyamoya disease (MMD) is a cerebrovascular occlusive disease of the bilateral internal carotid arteries that causes a compensatory abnormal vascular network at the base of brain. The rare incidence and various surgical techniques applied have limited the clinical research on MMD. […]

Moyamoya disease, a known cause of pediatric stroke, is an unremitting cerebrovascular occlusive disorder of unknown etiology that can lead to devastating, permanent neurological disability if left untreated. It is characterized by progressive stenosis of the intracranial internal carotid arteries and their distal branches and the nearly simultaneous appearance of basal arterial collateral vessels that vascularize hypoperfused brain distal to the […]