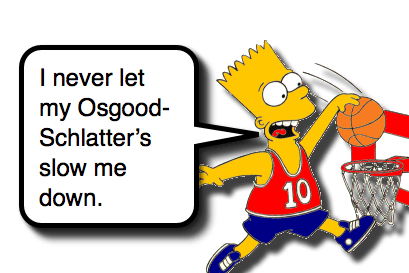 Musculoskeletal complaints are common in the pediatric Emergency Department. As I sit here watching March Madness Basketball (for those not in the US, that is our college basketball tournament, during which my wife consistently humiliates me by picking the winner), I was inspired to write this Morsel. We have covered several Orthopaedic topics in the past (ex, Toddler’s Fracture, Plantar Puncture Wounds, Supracondylar Fracture, Clavicular Head Dislocation), but one of the most commonly encountered is Osgood Schlatter’s Disease.

Knee pain in children and adolescents is one of the most prevalent complaints in a pediatric practice, accounting for at least a third of musculoskeletal complaints. Accurate diagnosis requires an understanding of knee anatomy and patterns of knee injuries and skill in physical examination. This review covers the most common causes of knee pain in children and adolescents, including overuse issues, such as Osgood-Schlatter and osteochondritis dis […]

The purpose of this study was to determine if there is a sex difference in the prevalence of specific patellofemoral disorders that cause anterior knee pain in adolescent basketball players undergoing pre-participation screening. […]

Osgood-Schlatter disease (OSD) is one of the common causes of knee pain in active adolescents who play sports. The common age for boys to have OSD is between 12 and 15 years and for girls, between 8 and 12 years. Radiographic studies are helpful in diagnosis and treatment of OSD. […]