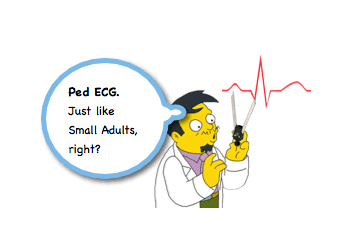 Electrocardiograms are fun to look at: like abstract art that hangs in a fancy museum, their beauty is often in the eye of the beholder. That being said, they are a vital tool to interpret. There are several situations when the Pediatric ECG is an integral part of the evaluation (ex, Syncope / Hair grooming syncope, Submersions, Seizures – not all that seizes is a seizure, BRUE, Breath Holding Spells, Pericarditis, ALCAPA, and Chest Pain). Unquestionable, ECGs are more commonly encountered when evaluating adult patients, but the infrequent encounters with the Pediatric ECG may make us less comfortable with them. Let us take a minute to consume a morsel of the Pediatric ECG:

We describe a simplified method for interpreting a pediatric electrocardiogram (EKG). The method uses 4 steps and requires only a few memorized rules, and it can aid health care providers who do not have immediate access to pediatric cardiology services. Most pediatric EKGs are normal. However, both abnormal and normal EKGs should be sent to a pediatric cardiologist for later, confirmatory interpretation. […]

Approximately 1% of newborns are affected by congenital heart disease (CHD), and although many lesions of CHD have trivial hemodynamic and clinical implications, some clinically significant lesions are asymptomatic in the immediate newborn period and may present after discharge from the well baby nursery. Because of this, CHD should be considered in the differential diagnosis of any ill-appearing newborn, regardless of the presence of cyanosis. I […]

The following article in this series will describe common arrhythmias seen in the pediatric population. Their definitions and clinical presentations along with electrocardiogram (ECG) examples will be presented. In addition, ECG changes seen in acute toxic ingestions commonly seen in children will be described, even if such ingestions do not produce arrhythmias per se. Disturbances of rhythm seen frequently in patients with unrepaired and correct […]

Emergency physicians attending to pediatric patients in acute care settings use electrocardiograms (ECGs) for a variety of reasons, including syncope, chest pain, ingestion, suspected dysrhythmias, and as part of the initial evaluation of suspected congenital heart disease. Thus, it is important for emergency and acute care providers to be familiar with the normal pediatric ECG in addition to common ECG abnormalities seen in the pediatric populat […]