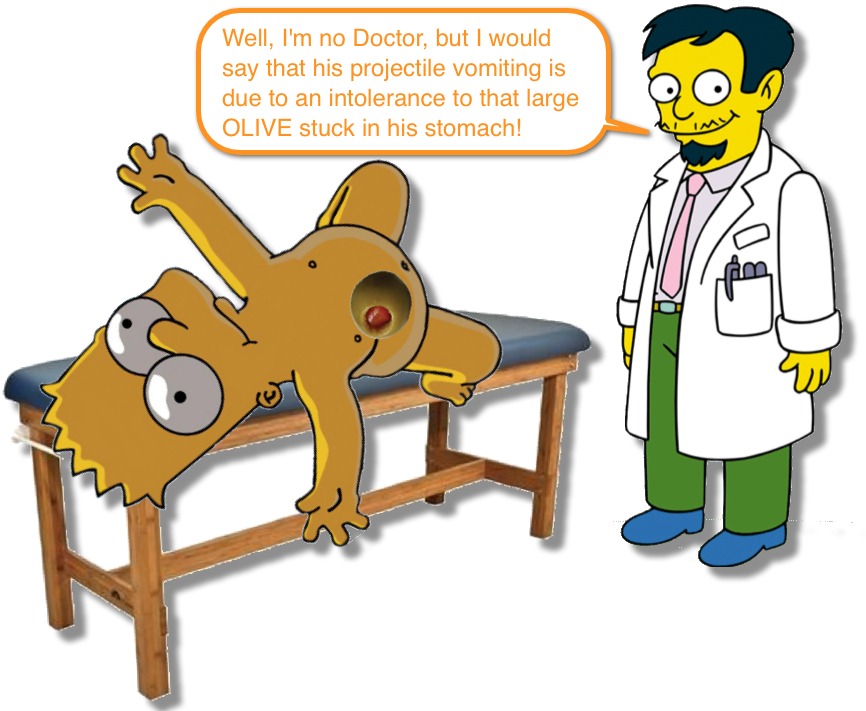 We have discussed vomiting a lot (we just can’t get away from it sometimes!).  We covered “simple” issues like emesis/diarrhea and therapies for dehydration. We have also covered more ominous conditions like intussusception, necrotizing enterocolitis, and Inborn Errors of Metabolism. All of these conditions deserve our attention and frequent consideration when evaluating the child with vomiting; however, there is one entity that is commonly considered, often encountered, and frequently the topic of test questions: Pyloric Stenosis.

Bottom Line: Currently, patients present earlier and are diagnosed more readily with simple techniques and this has lead to reductions in the frequency of metabolic disturbances, dehydration, and starvation.  So the “classic” findings of Pyloric Stenosis are becoming less commonly found.

Recent investigations have demonstrated that the classic hypochloremic, hypokalemic, metabolic alkalosis of hypertrophic pyloric stenosis (HPS) is not a common finding.Some have suggested a trend over time, but none has investigated factors contributing to laboratory derangement, such as duration of vomiting or patient age at presentation. We sought to determine the proportion of patients with HPS with normal and abnormal laboratory findings as a […]

The study aims to review the contemporary presentation, diagnosis and treatment of children with infantile hypertrophic pyloric stenosis (IHPS) at an Australian paediatric tertiary centre. […]

To describe the incidence of bilious vomiting in infants with infantile hypertrophic pyloric stenosis that presented to a pediatric emergency department. […]

Infantile hypertrophic pyloric stenosis is a common condition affecting young infants; despite its frequency, it has been recognized only for a little over a century, and its etiology remains unknown. Nevertheless, understanding of the condition and of effective treatment have undergone a remarkable evolution in the 20th century, reducing the mortality rate from over 50% to nearly 0%. The lesion is characterized by gastric outlet obstruction and […]