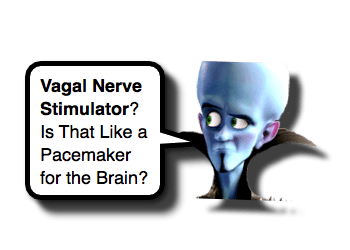 Managing seizures in pediatric patients is a common occurrence in the Emergency Department. We have discussed seizure related issues in the past: Seizure Mimics, Neonatal Seizures, Simple Febrile Seizures, and Complex Febrile Seizures.  Some seizures require us to remember unique pediatric conditions (ex, Pyridoxine Dependent Seizures) and some others require us to know unique therapies (ex, Ketogenic Diet).  As with any therapy, there are pros and cons to understand.  Let us look at the pros and cons related to Vagal Nerve Stimulators (VNS):

Vagal Nerve Stimulator: What is that?

Vagal Nerve Stimulator: Is it helpful?

Over the past two decades, vagus nerve stimulation (VNS) has become an accepted and viable treatment modality for intractable epilepsy both in children and adults. Earlier studies have demonstrated short-term seizure outcomes, usually for up to 5 years; so far, none have reported an extended outcome in children. We aimed to assess long term seizure outcome in children with intractable epilepsy for more than 5 years. […]

Epilepsy is a common disease in the world. Around 10-40% of patients who suffer epilepsy will have intractable seizures. When resective epilepsy surgery is not possible, vagus nerve stimulation (VNS) can be an option. The most common side effects associated with VSN therapy are hoarseness, throat pain and coughing. Cardiac arrhythmia has been reported during lead tests performed during implantation of the device, but few cases during regular tre […]

Vagal nerve stimulators (VNS) are surgically implantable medical devices which are approved by the food and drug administration (FDA) for treatment of medically refractory epilepsy in children. Two children with seizures disorders presented to the pediatric otolaryngology clinic with complaints of stridor and sleep apnea following implantation of VNS devices. Both children were evaluated with flexible laryngoscopy, direct laryngoscopy and broncho […]

Vagus nerve stimulation (VNS) seems to be effective in the management of selected cases of pharmacoresistant epilepsy in children. This was a case-control prospective study of children with refractory epilepsy submitted to vagal nerve stimulator implantation and a control group with epilepsy treated with antiepileptic drugs. Patients under 18years of age who underwent clinical or surgical treatment because of pharmacoresistant epilepsy from Janua […]

Twiddler syndrome is uncommon in children and most commonly described as causing lead retraction with implanted cardiac pacemakers and defibrillators. We report an uncommon case of a child repeatedly “twiddling” a vagal nerve stimulator to the point of lead fracture. The findings of Twiddler syndrome illustrated here apply to all implanted devices and show the complication of lead fracture in addition to the more commonly reported complication of […]

The authors conducted a study to evaluate the published results of vagal nerve stimulation (VNS) for medically refractory seizures according to evidence-based criteria. […]

The aim of this study was to define better the incidence of surgical complications and untoward side effects of chronic vagus nerve stimulation (VNS) in a population of children with medically refractory epilepsy. […]