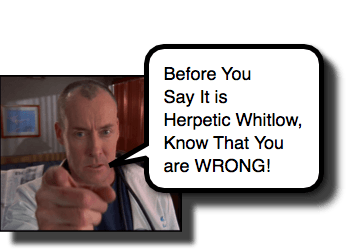 Infectious diseases seem to be omnipresent in the Ped ED and, thus, have their own dedicated Category of the PedEMMorsels.  Additionally, unusual dermatologic eruptions are also quite prevalently encountered when caring for children (see Approach to Rash).  While individually each category is fun to think about, the excitement more than doubles when they occur concurrently (perhaps I am being facetious). Let’s review Blistering Distal Dactylics! (say that 6 times fast in a row – I dare you)

Blistering Distal Dactylitis: What It Is

Blistering distal dactylitis is a distinct clinical entity, generally due to S. pyogenes, unfrequently reported. Characteristically, blistering distal dactylitis is described as a localized infection involving the distal phalanx of the digits, and it usually presents as a fluid-filled blister. Between October 2009 and June 2014, 69 children (median age: 60 months, extremes: 0,6-176) were enrolled. The sensitivity of GAS rapid antigen detection te […]

The purpose of this study was to assess the performances of the group A streptococcus (GAS) rapid antigen diagnostic tests (RADTs) in extra-pharyngeal infections. Between October 2009 and June 2014, 368 patients (median age: 48 months) were enrolled. The pathologies involved were : 160 perineal infections (44 %), 69 blistering distal dactylitis (19 %), 55 cervical lymphadenitis (15 %), 31 crusty or bleeding rhinitis (8 %), and 53 other diseases ( […]

We describe a 6-month-old infant with blistering distal dactylitis. Bacterial culture from the skin lesion grew methicillin resistant Staphylococcus aureus. No carriage of this bacterial agent was identified in her family. She responded to vancomycin administration and incision and drainage of the lesion. This is the first reported case of methicillin resistant Staphylococcus aureus-associated blistering distal dactylitis in an infant. […]

Blistering distal dactylitis (BDD) manifests as acral oval bullae 10-30 mm in diameter, and is caused by infection with Gram-positive bacteria. BDD was first linked to infection with group A beta-haemolytic streptococcus in children, but has more recently linked to Staphylococcus aureus and noted in adults. BDD most commonly occurs as bullae on the volar fat pads of the fingers but can occur on the proximal phalangeal and palmar areas of the hand […]

Blistering distal dactylitis (BDD) is a distinct clinical entity that is infrequently reported in the literature. Characteristically, blistering distal dactylitis is described as a localized infection involving the volar fat pad of the distal phalanx of the digits, and it usually presents as a fluid-filled blister. The usual causative organism is group A beta-hemolytic Streptococcus, but less commonly, Staphyloccous aureus and Staphyloccoccus epi […]

Discitis and Spondylodiscitis in Children