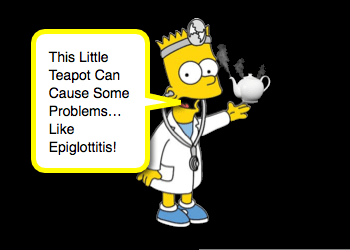 There are a number of conditions that were once very prevalent that immunizations have made less commonplace. While they may be less common, they may still occur and we should remain vigilant for them (see, Measles, Mumps, Tetanus, Pertussis). Recently, one of my stellar residents (and part of the @EMGuideWire team), Dr. Jaron Raper, reminded me of another condition that we all learned to fear, but because of vaccinations is infrequently encounter. While it may not be seen as often as it once was, it is still critical to respect. So let’s review Epiglottitis:

Epiglottitis: Causes of the Swelling

Anything that causes edema of the epiglottis can lead to the condition. [Richards, 2016]

Respiratory emergencies are 1 of the most common reasons parents seek evaluation for the their children in the emergency department (ED) each year, and respiratory failure is the most common cause of cardiopulmonary arrest in pediatric patients. Whereas many respiratory illnesses are mild and self-limiting, others are life threatening and require prompt diagnosis and management. Therefore, it is imperative that emergency clinicians be able to pro […]

Thermal epiglottitis is a rare but potentially life-threatening disease. Diagnosis requires a thorough history and high clinical level of suspicion, particularly in children. Thermal epiglottitis from steam inhalation can have a slow onset without oropharyngeal signs of thermal injury, findings that can hide the clinical diagnosis. […]

To review the epidemiology of epiglottitis in a large children’s hospital from 1995-2003 and to compare the findings with a previous report published 27 years previously from the same hospital. […]