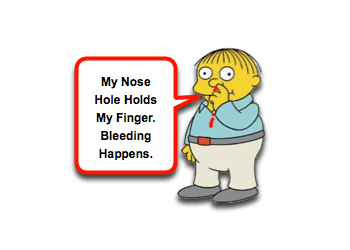 To a child, the nose is a fascinating part of the anatomy. When it is working well, they barely notice it. When it isn’t, it is the focus of much interest and anxiety. Additionally, it can be used as a piggy bank (ex, Nasal FB, Button Batteries), which makes it even more fun! Unfortunately, it also tends to stick out a bit and is prone to get struck (ex, Nasal Fracture). All this fascination, fun, and prominence can lead to bleeding, and as we know from our ability to use the nose as an expressway to access the bloodstream (ex, Intranasal Analgesia), the significant blood flow to the region can make nosebleeds look quite horrific. Let’s take a minute to consider the common, and also concerning, conditions associated with Epistaxis in Children:

To use standardized bleeding questionnaires to compare the severity and patterns of epistaxis in children with a mucocutaneous bleeding disorder and control children. […]

Investigate the epidemiological characteristics of pediatric epistaxis in the emergency department setting. […]

Epistaxis is a common emergency department (ED) complaint; however, this entity is rare among children younger than 2 years of age. In this age group, epistaxis may be a presenting sign of a bleeding disorder or nonaccidental trauma. […]

Epistaxis is a common problem in childhood. It has been shown that children with recurrent epistaxis are more likely to have nasal colonization with Staphylococcus aureus. It has been suggested that low-grade inflammation, crusting and increased vascularity due to bacterial colonization contributes to the development of epistaxis in children. […]

To evaluate the role of nasal bacterial colonization in cases of idiopathic epistaxis in children. […]

Epistaxis in the pediatric population is a common problem for both primary care physicians (PCPs) and otolaryngologists. Although a frequent reason for referral to ENT clinics, data is lacking regarding causes, effects on quality of life and common treatment modalities. […]

Otolaryngologists are frequently consulted for the evaluation and treatment of pediatric epistaxis. There is a lack of consensus as to the optimal approach to this problem. This study evaluated an approach used to evaluate and treat patients referred on an outpatient basis. […]