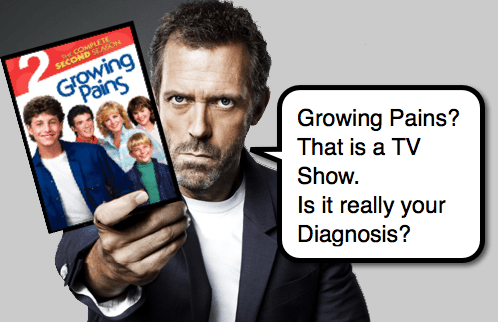 We have discussed previously how working in the Peds ED is like being tasked with finding the rare, life-threatening needle in the haystack of the benign and common.  In order to do this, it requires us to maintain a baseline paranoia helping us to remain ever vigilant.  It also helps to have keen eyesight for subtle red flags. Recently we discussed osteosarcoma, but the child with leg pain will much more likely have Osgood-Schlatter’s Disease or “growing pains.”  It is quite tempting to reflexively diagnose “growing pains” in the young child who is “growing” and has “pain,” but otherwise appears well.  What are the signs that should cause us to pause before we pronounce Growing Pains as the diagnosis?

Growing Pains: Not due to growing

If growing pains are benign, but are a diagnosis of exclusion, what are some conditions that need to be considered first, before considering growing pains?

Looking for the dangerous needle in the haystack of benign conditions? Be alert for:

Symptomatic treatment… which, again, doesn’t work for osteosarcoma… so be vigilant!

Though cases of ‘growing pains’ are quite common in pediatric practice, very little attention has been given to it, even in the standard text books. The resultant confusion among practitioners regarding diagnosis and management of this condition needs to be addressed. […]

Bone pain in children is common. The cause may be as benign as growing pains or as life-threatening as a malignancy. When a cause cannot be established by laboratory tests, physical examination or patient history, imaging of the affected body part is often obtained. Distinguishing benign from malignant processes involving the bones of children, based on imaging findings, can be challenging. The most common benign conditions that mimic pediatric b […]

The present study was conducted to determine if performing laboratory tests are necessary to exclude other possible diagnoses in a child with limb pains typical for growing pains according to history and physical examination. […]