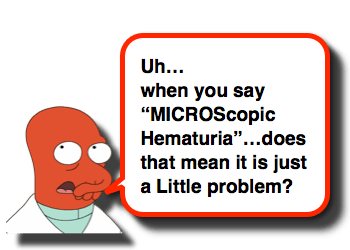 Obtaining a urinalysis is often part of the management plan in the Ped ED to screen for a condition.  Often it is obtained to look for possible infection.  Sometimes we are evaluating unusual swelling with concern for proteinuria. What, however, do we need to consider when we encounter Microscopic Hematuria?

Hematuria is defined as an abnormal number of red blood cells in urine. Even a tiny amount of blood (1 mL in 1000 mL of urine) is sufficient to make urine appear pink or red. In the pediatric population, the majority of etiologies are benign and often asymptomatic. However, hematuria may also be a sign of renal pathology, local infection, or systemic disease. Hematuria can be differentiated into 2 categories: macroscopic hematuria (visible to the […]

Finding blood or protein in the urine of a patient can be the source of immense anxiety. The list of diseases that result in these findings is quite long. Thus, many pediatricians believe that an exhaustive investigation is necessary to be certain of the cause. The review will discuss the major causes of hematuria and proteinuria in the pediatric population, and discuss a rational approach to the evaluation of these conditions. […]

Although isolated gross hematuria is a disturbing symptom, there have been few studies of this finding in pediatric patients. Therefore, this study was performed to examine the associated symptoms and causes of gross hematuria in children and adolescents who presented with this problem as their major clinical manifestation. It also determined the long-term outcome of patients in whom no etiology was found. A retrospective review was performed on […]