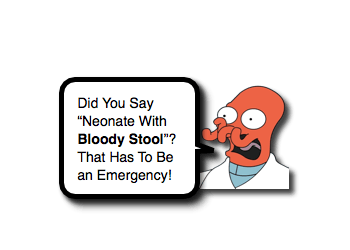 While the pediatric population deserves special attention (the purpose of this website), kids are not aliens… they are just small humans with unique anatomy and physiology that must be consider when caring for them.  The neonate, on the other hand, is like an alien! They, literally, are brand new to the planet and behave differently. We have covered several neonatal issues previously, but let us add to that list with potentially challenging complaint: the Neonate with Bloody Stool.

There are many causes of gastrointestinal bleeding (GIB) in children, and this condition is not rare, having a reported incidence of 6.4%. Causes vary with age, but show considerable overlap; moreover, while many of the causes in the pediatric population are similar to those in adults, some lesions are unique to children. The diagnostic approach for pediatric GIB includes definition of the etiology, localization of the bleeding site and determina […]

Hematochezia in the pediatric population, particularly infants, has a wide differential diagnosis ranging from benign to life-threatening causes. Obtaining a thorough history and identifying risk factors for more ominous disease is vital during the emergency department (ED) evaluation. […]

Necrotising enterocolitis is a serious disorder in preterm infants with a mortality of up to 60%. Therefore, early and precise diagnosis and rapid initiation of proper treatment are essential. Clinically suspected diagnosis is usually confirmed by typical findings on plain abdominal radiograph, for example, pneumatosis intestinalis, portal venous gas and, in case of intestinal perforation, pneumoperitoneum. Recently, there has been growing eviden […]

Rectal bleeding is an alarming symptom and requires additional investigation. In infants it has been explained mainly by hypersensitivity. In addition to dietary antigens, intraluminal microbial agents challenge the immature gut mucosa. Although controlled in the mature gut, these antigens may induce inflammation in the developing gastrointestinal tract. The objectives of this study were to evaluate prospectively the clinical course of rectal ble […]