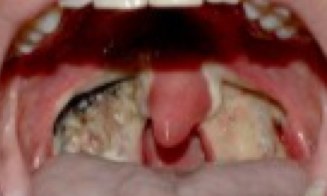 We know that all bleeding eventually stops: ideally, by means that we have imposed rather than by exhaustion of the patient’s RBC resources. We also know that the easiest, and often most efficacious, way to halt bleeding is to put some manual pressure on the source of bleeding. Well, that isn’t always so easy to accomplish. How do you put your finger on a bleeding tonsil? Let’s review Post-Tonsillectomy Hemorrhage.

Pediatricians play an important role in the perioperative care of hospitalized children after tonsillectomy and are often called upon to manage posttonsillectomy problems in the outpatient setting. The tonsillectomy operation has changed in recent years. More children are operated upon for sleep disordered breathing and fewer for recurrent pharyngitis. New instruments now permit less invasive surgery. Systematic reviews by the Cochrane Collaborat […]

Serious post-tonsillectomy hemorrhage (PTH) is an uncommon complication requiring immediate and adequate medical treatment. This study was undertaken to describe and evaluate the clinical data and courses of serious PTH, with and without lethal outcome in children and adolescents. […]

There are an estimated 4,300 cases of postoperative hemorrhage after tonsillectomy in the United States each year. Most patients seek care in the Emergency Department for this potentially fatal condition. This study was performed to characterize the clinical presentation of patients seeking Emergency Department (ED) care for posttonsillectomy and postadenoidectomy hemorrhage (PTAH). In addition, the investigators attempted to describe the ED trea […]