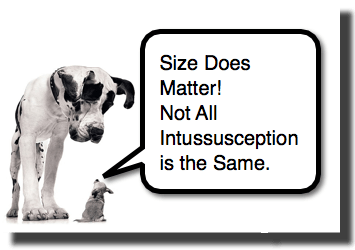 Small Bowel Intussusception: The Benign and The Bad

Small Bowel Intussusception: Will it be Transient?

To evaluate and compare the ultrasound (US) features of transient small bowel intussusception (SBI) with those which required surgical management. […]

To assess clinical and ultrasonographic (US) criteria that can be used to confidently differentiate ileocolic from small-bowel intussusception. […]

This study aims to evaluate ultrasound findings that are predictive of the need for surgical management in pediatric patients with small bowel intussusceptions (SBIs). […]

To study the ultrasound (US) findings and clinical significance of transient small bowel intussusceptions (TSBI) in adults and children. […]

We aim to justify the need for surgical intervention in our patients with childhood small bowel intussusceptions (SBIs) and review the current concepts in childhood SBI. […]

To determine the frequency and significance of small-bowel intussusception identified in children on CT. […]

Emergency laparotomy is generally considered the appropriate course of action for small bowel intussusception associated with Henoch-Schönlein’s purpura (HSP). In this paper, we define a conservative approach after witnessing spontaneous reduction of ileoileal invagination at laparotomy in a patient with HSP who had been on steroid therapy for renal involvement. […]

To analyze the spectrum of clinical features, management and outcome of children with documented spontaneous reduction of intussusception (SROI). […]