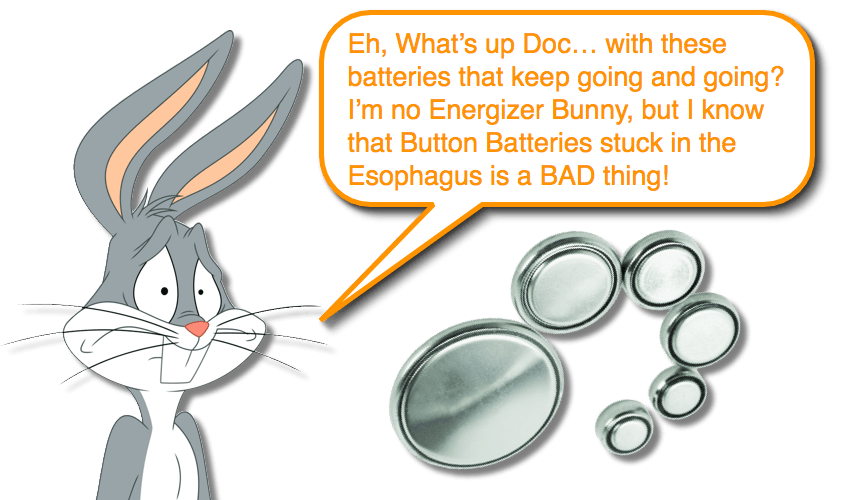 We all know that kids love to put odd objects in their mouths (and ears, and nostrils, and other interesting places).  We also know that this can cause significant problems and lead to true emergencies.  The location of the object (ie, airway) may lead to the emergency, but don’t forget that the object itself may lead to problems and severe tissue destruction!  Button batteries are one of these unique objects that warrant our specific concern and respect!  We have discussed previously the problems that a button battery in the nostril can cause, now let us turn our attention to a potentially even more devastating problem: Button Battery Ingestion.

Button Battery – Scope of the Issue

Objectives: To report a case of misdiagnosis of an impacted oesophageal button battery in a child, and to describe the associated risk factors for impaction and the management of such cases. Case report: An 18-month-old, otherwise fit and well child with stridulous respiration was initially treated for croup. Medical treatment over the course of three months failed, and appropriate imaging subsequently demonstrated an impacted button battery in t […]

Over the last 10 years, there has been a dramatic rise in the incidence of severe injuries involving children who ingest button batteries. Injury can occur rapidly and children can be asymptomatic or demonstrate non-specific symptoms until catastrophic injuries develop over a period of hours or days. Smaller size ingested button batteries will often pass without clinical sequellae; however, batteries 20mm and larger can more easily lodge in the e […]

Foreign body ingestion is a common problem among paediatric populations. A variety of foreign bodies are ingested, some of which are particularly harmful and life threatening such as button batteries, magnets and bones. Common household items such as small toys, marbles, batteries and erasers are often ingested. The aim of this systematic review is to study the problem of foreign body ingestion among paediatric populations in terms of commonly in […]

To investigate the epidemiology of battery-related emergency department (ED) visits among children <18 years of age in the United States. […]

Injuries to children caused by batteries have been documented in the medical literature and by poison control centers for decades. Of particular concern is the ingestion of button batteries, especially those ≥20 mm in diameter (coin size), which can lodge in the esophagus, leading to serious complications or death. To estimate the number of nonfatal battery injuries among children aged <13 years, U.S. Consumer Product Safety Commission (CPSC […]

Recent cases suggest that severe and fatal button battery ingestions are increasing and current treatment may be inadequate. The objective of this study was to identify battery ingestion outcome predictors and trends, define the urgency of intervention, and refine treatment guidelines. […]