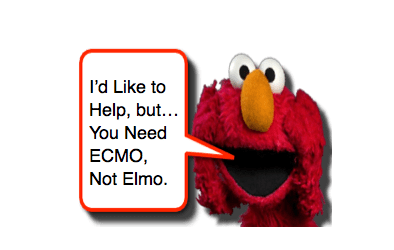 Remaining vigilant for the child with a subtle presentation of a severe illness is part of our job in the Ped ED; however, sometimes, the illness is not subtle and the child requires critical actions (ex, Damage Control Resuscitation, Mechanical Ventilation, Optimize Chest Compressions)  .  Often, it is best to consider these critical actions prior to needing to do them so there is no delay. One such, potentially life-saving, critical action is Extracorporeal Membrane Oxygenation (ECMO).  Recently there was a nice review of Pediatric ECMO [Gehrmann, 2015] that deserves further contemplation. Below are some highlights from that article:

ECMO: in the Ped ED

Extracorporeal membrane oxygenation (ECMO) therapy has supported critically ill pediatric patients in the intensive care unit setting with cardiac and respiratory failure. This therapy is beginning to transition to the emergency department setting. […]

The use of extracorporeal membrane oxygenation (ECMO) as a resuscitative measure during or after manual cardiopulmonary resuscitation (CPR) shows sharply contrasting results. To assess the added value of ECMO in this situation and looking for predictors of mortality we performed a meta-analysis of individual patients collected from observational studies. An electronic Pubmed search restricted to English language publications between 1990 and 2007 […]