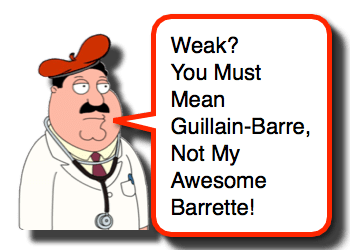 Aw, the Winter Season in the Ped ED… how we all love the viral pathology! Let us recall, however, that we must be vigilant in the face of the seemingly constant waves of children with fevers and rhinorrhea. We already know that we should not say, “It’s Just a Virus.” While it is good to give appropriate anticipatory guidance, it is also important to be vigilant for potential complications of “simple” viral illnesses also (Pneumonia, Acute Otitis Media, Myocarditis). Let us review another potentially scary complication: Guillain-Barre Syndrome.

Sixth cranial nerve (SCN) palsy is an uncommon but important neurological problem in patients admitted to pediatric emergency department. The underlying etiology of SCN palsy has a wide range from viral infections to intracranial tumors; therefore, a careful and systematic approach is necessary while examining these patients. […]

A 10-month-old male infant presented to the emergency department (ED) with a chief complaint of weakness, decreased mobility, and regression of motor milestones over a period of 6 days. Significant medical history included a Roseola infection 5 weeks before ED presentation. The patient’s pediatrician and chiropractor had both previously diagnosed the patient with strains and sprains. After progression of symptoms, the patient presented to the ED […]

Guillain-Barré syndrome (GBS) is the most common cause of acute flaccid paralysis in children. This review discusses the heterogeneous presentations of this disorder, the frequency of disease-related complications and the importance of assiduous clinical care in pediatric GBS. […]

Guillain-Barre syndrome (GBS) is an acquired disease of the peripheral nervous system which causes demyelination and leads to weakness, ataxia, and areflexia. There are a variety of forms of the syndrome, and although it is found in all age groups, it is rare in children less than two years of age. The present complaint of weakness, ataxia, or lower extremity pain in the pediatric population should cause the practitioner to consider GBS in the di […]

GBS and its MFS variant are acute polyneuropathies that are considered to represent a continuum rather than distinct entities, due to the overlap in their clinical features. Enhancement of the CE roots represents the neuroradiologic hallmark of GBS, while findings of neuroimaging studies in MFS are usually unremarkable. Our purpose was to evaluate the MR imaging findings of polyneuropathy in 17 children affected by GBS and its MFS variant. Fourte […]

The authors describe the demographics, clinical presentation, investigation, treatment, and outcomes of pediatric patients with Guillain-Barré syndrome. They identified 35 pediatric patients with Guillain-Barré syndrome presenting to a tertiary academic center over a 20-year period. The most common presenting symptoms were paresthesias (54%), weakness (49%), and myalgias (49%). Sensation was affected in 54% of patients, and hyporeflexia or aref […]

Guillain-Barré syndrome (GBS) is an acute inflammatory polyneuropathy commonly characterised by rapidly progressive, symmetric weakness and areflexia. This study is to assess the clinical characteristics of paediatric GBS, as well as its long-term functional prognosis. […]

In industrialized nations with widespread immunization programs, Guillain-Barré syndrome is the most common cause of acute paralytic illness in children and adults. The incidence of the disease has been estimated to range from 0.5 to 1.5 in 100,000 in individuals less than 18 years of age. Approximately 15% of children with Guillain-Barré syndrome develop respiratory failure and require mechanical ventilatory support. Prospective randomized tre […]