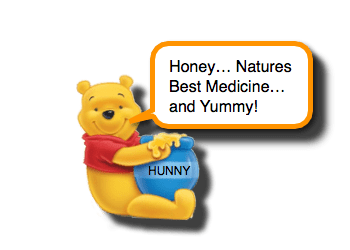 Cough is a very common symptom in children. Certainly, we need to consider that an ominous cause may be lurking (Asthma, Occult Aspirated Foreign Body, Croup, Sinusitis, Pneumonia, Acute Chest Syndrome, etc.). Most often, though, the cough is due to a viral illness, but remember viral illnesses can become complicated (see, Myocarditis, Guillaine-Barre). So, take care not to be dismissive. Additionally, while you are doing your best to avoid the phrase “just a virus,” prepare yourself to address the parent’s next question: “What can be used to make the cough better?”  Unfortunately, there are not many medications that are safe to use in young children… but this may be an opportunity to “prescribe” Winnie the Pooh’s favorite: Honey for Cough.

Ok, now that we are clear that Honey should not be recommended for a child < 1 year of age, let’s get back to how it may help your older child with a cough!

Available pediatric treatments for acute cough are limited by lack of demonstrated efficacy. The objective of this trial is to compare the effects of a polysaccharide-resin-honey based cough syrup, and carbocysteine syrups on nocturnal and daytime cough associated with childhood upper respiratory tract infections (URIs). […]

Tonsillectomy is one of the most common operations performed in pediatric population. One of the most prevalent tonsillectomy complications is early or delayed post-operative hemorrhage. Other important morbidity is post-operative pain. Historically, honey has been used for wound control, reducing the inflammation, and healing acceleration. The aim of this study is to investigate the effect of honey on reducing pain after tonsillectomy in childre […]

Tonsillectomy with or without adenoidectomy is one of the most common surgical procedures performed worldwide, especially for children. Oral honey administration following tonsillectomy in pediatric cases may reduce the need for analgesics via relieving postoperative pain. […]

Cough due to upper respiratory tract infections (URIs) is one of the most frequent complaints encountered by pediatric health-care providers, and one of the most disruptive symptoms for children and families. Despite the frequency of URIs, there is limited evidence to support the few therapeutic agents currently available in the United States (US) to treat acute cough due to URI. Published, well-designed, contemporary research supporting the effi […]

To compare the effectiveness of acetaminophen versus acetaminophen-plus-honey following pediatric tonsillectomy and adenoidectomy. […]