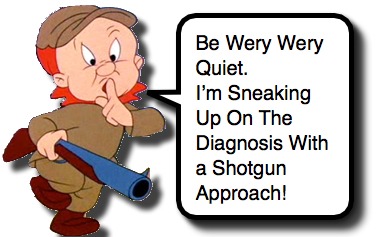 Patients’ families often present to us requesting “bloodwork” to make sure that the child is not “sick” or to tell them “what’s wrong.”  While we all know that no lab can be used to proclaim complete certainty of a patient’s health or to make a definitive diagnosis on its own, often we perpetuate the myth by ordering labs that do not necessarily direct our actions.  By now, most of you know of my disdain for the ubiquitous WBC count (The Last Bastion of the Intellectually Destitute – Amal Mattu), but there is another often ordered test that may also fall into that category — the Lactate Level.

The Lactate Level has grown in popularity over the past decade, particularly in the Adult EDs.  Certainly, there is literature that supports its utility with respect to evaluation of SEPSIS and trauma, but this often becomes extrapolated to all patients who “may be sick” as a means to find the covertly ill.  This  approach (often in a “shotgun” fashion) has steadily crept into the Pediatric EDs as well.  What is the known utility of Lactate Level in children? [Thank you @ErnestoAlarco12 for inspiring the question].

Most often elevated Lactate Levels conjure thoughts of tissue hypoperfusion with diminished access to oxygen (SHOCK), but there are others causes to consider. (Anderson, 2013)

Lactate Level – Did it Help You?

Increased blood lactate levels reflect tissue oxygen debt and might be indicative of low cardiac output. We hypothesized that the rate of increase in serum lactate would be an ideal marker to discriminate between infants at high and low risk of a poor outcome after surgical repair of congenital heart disease using cardiopulmonary bypass. […]

To describe the association of lactate levels within the first 12 hours after successful resuscitation from pediatric cardiopulmonary arrest with hospital mortality. […]

Lactate levels are commonly evaluated in acutely ill patients. Although most often used in the context of evaluating shock, lactate levels can be elevated for many reasons. While tissue hypoperfusion may be the most common cause of elevation, many other etiologies or contributing factors exist. Clinicians need to be aware of the many potential causes of lactate level elevation as the clinical and prognostic importance of an elevated lactate level […]

Post-operative course after complex pediatric cardiac surgery is unpredictable. Although, change in arterial lactate levels has been used as a surrogate marker for many years, scientific evidence correlating the early perioperative lactate levels with outcome is still lacking. […]

An association of high lactate levels with mortality has been found in adult patients with septic shock. However, there is controversial literature regarding the same in children. The aim of this study was to find the correlation of serum lactate levels in pediatric septic shock with survival. […]