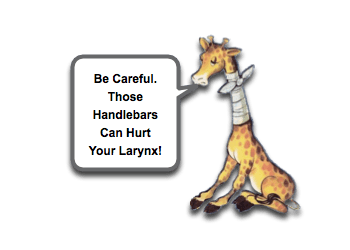 Few things are more synonymous with pediatric emergency care than “throat pain” and “trauma.” If you are seeing children in the ED right now, I’m sure there is one complaining of sore throat and another has had a recent traumatic injury. We’ve addressed many topics that cause throat pain in children (ex, Strep Pharyngitis, PTA, RPA, Neck Mass, and Lemierre’s) and we have covered numerous traumatic conditions (ex, Thoracic, Abdominal, and Major Head Trauma), but what happens when one patient complains of both issues? Could it be a Cervical Spine Injury or Penetrating Neck Trauma? Perhaps, but let us not overlook the traumatic blow to the anterior neck (the hip kids today talk a lot about “throat punching”… so let’s be hip too). Let’s take a minute to review Laryngeal Injury and Fracture:

Pediatric blunt or sharp laryngotracheal injuries are infrequent because of the softer cartilages and the protection of the prominent mandible. These injuries usually occur secondary to striking furniture or via the “clothesline” injury. […]

Throat pain is a common presenting complaint in the pediatric emergency department and often occurs secondary to non-life-threatening conditions. Certain etiologies may initially appear benign, but if not recognized and treated, may result in airway compromise. Patients with blunt trauma to the neck may present with throat pain. This is an uncommon pediatric injury usually due to a sharp blow to the anterior neck. This injury is rarely seen in is […]

We reviewed the evaluation and management of pediatric laryngeal trauma, focusing on the unique characteristics of the immature airway as they affect functional results. The study was based on 91 cases of acute laryngeal trauma managed by the senior author (E.S.P.) from 1973 to 1996. Patients over 15 years old were considered physically mature and excluded. The remaining 10 cases (mean age 9.7) were reviewed in detail and compared to the adult se […]