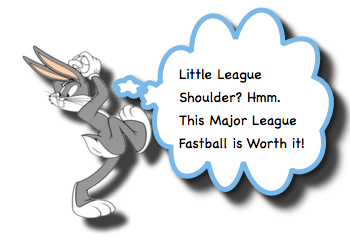 Summertime is rapidly approaching (at least for us in the Northern Hemisphere).  While this is often met with great excitement as we ponder vacations, it also means that we need to prepare for the consequences of all of that leisure time.  We have previously discussed the importance of injury prevention, particularly with respect to submersion injuries and lawn mower injuries, but not all of the leisure activities will lead to such significant risk of mortality.  The majority of the injuries that we will manage are the more common orthopedic varieties (ex, Patellar Dislocation, Shoulder Dislocation, Supracondylar Fracture). Unfortunately, while we all want/need our children to be active, this activity may lead to some injuries, even some from the repetitive nature of an activity like Osgood Schlatter Disease or Little League Shoulder.

The Child Athlete is at Risk

With rising participation in youth sports such as baseball, proximal humeral epiphysiolysis, or Little League shoulder (LLS), is being seen with increasing frequency. However, there remains a paucity of literature regarding the causes, natural history, or treatment outcomes of LLS. […]

In 2010, 8.6 million children were treated for unintentional injuries in American emergency departments. Child engagement in sports and recreation offers many health benefits but also exposure to injury risks. In this analysis, we consider possible developmental risk factors in a review of age, sex, and incidence of 39 sport and recreational injuries. […]

Pediatric overuse injury is a common complaint presenting to pediatricians. Overuse injury can affect the soft tissues or bone, and results from an imbalance between training and load to the tissues and recovery time. In the skeletally immature athlete, physeal and apophyseal tissue is particularly vulnerable to overuse resulting in different patterns of injury compared to adults. Awareness of age-dependent patterns of overuse is necessary for pr […]

This article highlights the unique patterns of sports-related injury of the upper extremity that radiologists are likely to encounter in children and adolescents. The injuries are classified as acute “use” injuries or chronic “overuse” injuries, and reviewed separately for the shoulder, elbow, and wrist. Recommendations for imaging strategies are provided and characteristic imaging findings are discussed and illustrated. […]

With increasing levels of competition at earlier ages, young athletes are becoming more susceptible to shoulder injuries. Overuse injuries in throwers are common conditions seen in pediatric and adolescent athletes. Little League shoulder and superior labial injuries are common due to the repetitive and high rotational forces placed on the shoulder during the throwing motion. Shoulder instability as a result of traumatic events occurring in colli […]

The present review aims to provide a synopsis of the current literature on little league shoulder, including etiology, diagnosis, prevention, and treatment. […]