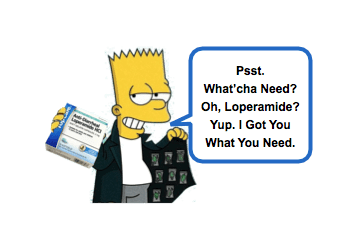 There are many conditions to consider when dealing with a patient who presents with altered mental status. Is there a significant intracranial pathology (ex, AVM, Trauma)? Is there a serious bacterial infection? Is there a terrible abdominal catastrophe (ex, Intussusception)? Is there a significant electrolyte abnormality or endocrine problem (ex, Hypoglycemia, Myxedema Coma)? Of course, we also have to consider and contend with possible intoxicants. Unfortunately, people keep getting more creative with what they choose to get High from. Let’s take a moment to add one new item to the list of possible intoxicants – Loperamide Abuse and Overuse:

Loperamide is a nonprescription opioid widely used for the treatment of diarrhea. Although it is relatively safe at therapeutic doses, increasing reports describe its misuse and abuse at very high doses either for euphoric effects or to attenuate symptoms of opioid withdrawal. Life-threatening loperamide toxicity can result from the relatively new clinical syndrome of loperamide-induced cardiac toxicity. These patients are often young and may pre […]

Loperamide abuse has been increasing in the United States as a potential alternative to manage opioid withdrawal symptoms or to achieve euphoric effects of opioid use. In June 2016, the Food and Drug Administration warned health care providers and the general public about potential serious adverse outcomes, including cardiac dysrhythmias and death. The purpose of this study is to determine recent trends in intentional loperamide abuse and misuse, […]

Loperamide is an over-the-counter, peripherally acting, μ-opioid receptor agonist used for the treatment of diarrhea. In recent times users have found that at higher doses, loperamide crosses the blood-brain barrier and reaches central μ-receptors in the brain, leading to central opiate effects including euphoria and respiratory depression. We report a case of a 37-year-old female who attempted suicide with over 200 loperamide tablets. During h […]

Loperamide is an over-the-counter, inexpensive, antidiarrheal opioid that can produce life-threatening toxicity at high concentrations. CASE REPORT 1: A 28-year-old man with a history of depression and substance abuse disorder (SUD) presented to the emergency department (ED) with shortness of breath and lightheadedness. He ingested large amounts of loperamide daily. The patient’s initial electrocardiogram (ECG) demonstrated sinus rhythm, right ax […]

Loperamide is an over-the-counter antidiarrheal agent that is considered by many patients to be safe, but has been used as a drug of abuse due to its opioid properties. However, cardiotoxicity has been reported, prompting the FDA to release a warning regarding the arrhythmogenic potential of loperamide. We present a case of a 38-year-old female presenting with cardiac arrest thought to be secondary to abuse of the loperamide that she was using to […]

Loperamide is over-the-counter antidiarrheal agent acting on peripherally located μ opioid receptors. It is gaining popularity among drug abusers as opioid substitute. We report a case of a 46-year-old male that was presented after cardiac arrest. After ruling out ischemia, cardiomyopathy, pulmonary embolism, central nervous system pathology, sepsis, and other drug toxicity, we found out that patient was using around 100 mg of Loperamide to co […]

Loperamide (Imodium®) has been accepted as a safe, effective, over-the-counter anti-diarrheal drug with low potential for abuse. It is a synthetic opioid that lacks central nervous system activity at prescribed doses, rendering it ineffective for abuse. Since 2012, however, the North Carolina Office of the Chief Medical Examiner has seen cases involving loperamide at supratherapeutic levels that indicate abuse. The recommended dose associated wi […]

Loperamide, a non-prescription anti-diarrheal agent, is a peripheral mu-opioid receptor agonist that is excluded from the blood-brain barrier by p-glycoprotein at therapeutic doses. Overdoses of loperamide penetrate the central nervous system (CNS), leading to abuse. We report cardiac conduction abnormalities and dysrhythmias after ingestion of a recreational supra-therapeutic dose of loperamide confirmed with an elevated blood loperamide concent […]