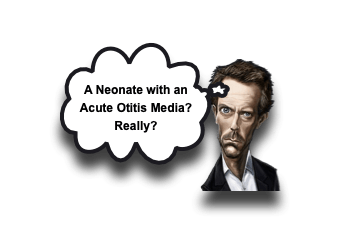 Ears! They are the focus of many ED visits! Things get stuck in them (ex, Ear Canal Foreign Body, Cerumen). They can become inflamed from swimming (ex, Swimmer’s Ear). Infection, though, is what we most often encounter. We are all quite proficient at the evaluation and management of typical Acute Otitis Media; however, our jobs can be quite atypical. We certainly have to consider potential complications of otitis media (ex, Mastoiditis, Gradenigo’s Syndrome, AOM and Cochlear Implants). One of our esteemed colleagues, Dr. Bryant Allen, recently encountered another clinical dilemma. Let’s take a minute to contemplate this clinical conundrum – Neonatal Acute Otitis Media:

I’ll be honest, if I am told that a neonate has an acute otitis media (AOM), my first instinct is to mistrust that claim and become offended that I’m being lied to. Why? because it is just so challenging to make the diagnosis in child less than 2 months of age. [Sommerfleck, 2013]

It is feasible though, to make the diagnosis in neonates and young infants. Since the difficulties are based on anatomic barriers, if the specific infant’s anatomy affords the clinician a good view and the diagnostic criteria are present, then the diagnosis can be made. Then what?

Since the 1980’s (yup, that was a long time ago) we have been struggling with determining which infants are low or high risk for serious bacterial infections. Whichever criteria you use, there is often a stipulation that AOM either increases the risk for systemic infection or it should not be considered as a source of the fever. This often equates to doing full sepsis work-up in neonates and children < 2 months of age with AOM.

On the other hand, we have already discussed how having a Urinary Tract Infection in a young infant may not substantially increase her/his risk for meningitis, especially for the >28 day old child. Could the same be true for AOM?

So what does that leave us with? Well… here is my interpretation of what is known thus far… obviously, this does not determine what is the “Gold Standard”… honestly, it is barely a copper standard.

Acute otitis media (AOM) is a common childhood illness. The aim of this study was to assess whether AOM in the first month of life predicts recurrent AOM (rAOM) in early childhood. The medical records of all neonates with AOM and isolation of bacterial pathogen from middle-ear fluid during 2005-2010 were reviewed. Neonates without AOM admitted during the same period for neonatal fever workup were included as controls. Information regarding rAOM a […]

This study was conducted to determine the frequency of otitis media in preterm neonates using otoendoscopy and tympanometry. […]

The true incidence of acute otitis media (AOM) in neonates and infants younger than three months is unknown. In this population organisms causing AOM may disseminate leading to bacteremia, sepsis, and meningitis [1]. […]

Acute otitis media is frequently encountered by general practitioners and pediatricians. In the neonatal period acute otitis media may present as an isolated local infection or as part of septicemia. Diagnosis of the condition by otoscopy is difficult. Considering the wide spectrum of middle ear disorders (acute otitis media, otitis media with effusion, chronic suppurative otitis media) one can appreciate why opinions on the management of the con […]

Acute otitis media (AOM) in the neonatal period can be difficult to diagnose. This infection can be isolated and localized, or it may be associated with serious bacterial infections or other illnesses. The objectives of this study were to determine the clinical presentation, etiology, susceptibility pattern, and frequency of bacteremia, meningitis and other serious bacterial infections associated with the first episode of AOM in young infants. […]

Information on the causative agents of acute otitis media (AOM) in infants <2 months of age is limited. […]

Neonatal otitis media may be an isolated infection or part of a more complex sepsis syndrome. Because early studies suggested that the microbiologic characteristics of neonatal otitis media included a high risk of gram-negative coliforms and Staphylococcus aureus, tympanocentesis was recommended routinely. Subsequent studies have supported empiric medical therapy in selected patients, reserving tympanocentesis for patients in whom medical treatme […]

The middle ear fluid (MEF) bacteriology of 107 attacks of acute otitis media (AOM) in 101 infants less than 3 months old was analyzed. A total of 108 bacteria were isolated from 85 attacks. Major AOM-pathogens, S. pneumoniae (19%), H. influenzae (9%) or B. catarrhalis (7%) were cultured in approximately one-third of all the attacks. S. aureus (17%) and coagulase-negative staphylococci (22%) without the above pathogens were commonly found, whereas […]